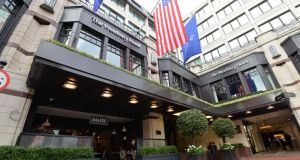 The Westbury Hotel in Dublin has been named the best hotel in Ireland in the Condé Nast Traveler, Readers’ Choice Awards.

The awards, which were announced after the votes of more than 700,000 people around the world who took part in the magazine’s annual survey were counted, ranked Lough Eske Castle in Co Donegal as the second best hotel in the country. Ballynahinch Castle in Connemara finished in the bronze medal position.

“The results of this year’s survey conducted at the start of the Covid-19 pandemic are a testament to the lasting power of a meaningful travel experience,” the editor of Condé Nast Traveler, Jesse Ashlock, said.

He said the winners represented “the best of the best for our audience and offer plenty of trip planning inspiration for all the adventures we can’t wait to have next”.

“If the Westbury were a person, it would be that friend you call up as soon as you hit town,” the travel magazine said in its citation of the winning hotel in Ireland.

It went on to say that the Westbury “is somewhere that prides itself on its sense of place. It’s all about location, location, location – tucked away just off the shopping mecca of Grafton Street and perfectly placed to tap into the scene”.

The guest rooms are, the magazine says, “gradually being spruced up and burnished with a lighter, brighter touch, there are killer cocktails and a local crowd at the glamorous Sidecar bar and staff work hard to help guests unlock hidden sides of the city”.

The Westbury’s general manager, Vincent O’Gorman, said the hotel was “delighted” to have been voted number one in Ireland.

“On behalf of the entire team at The Westbury, I would like to offer a heartfelt thanks to all of our guests for their continued support. In a year that has brought many challenges, we are sincerely grateful.”

The general manager at Lough Eske Castle, Donal Cox, also expressed  delight at the news. “On what has been a turbulent year for the Irish hospitality sector, today's news has lifted our spirits immensely. The staff at Lough Eske Castle, which has been open 13 years now, always do their very best to make guests feel welcome and enjoy a five-star experience with the warmth of Donegal hospitality, and an award like this is a much needed cause for a celebration.”

“Everything we do is about delivering a unique and authentic experience for our guests”, said the general manager of Ballynahinch, Eoin Walsh , “so there is nothing more gratifying, especially this year for us at Ballynahinch than winning an award like this which is based on votes from those most important people, our guests.

“To rank so highly among some of the world’s most famous hotel is a testament to the team here at Ballynahinch. It is they that make the difference and provide our guests with such a lasting and personalised experience.”

The Lodge at Ashford Castle in Co Mayo was ranked the fourth best hotel in Ireland in the prestigious annual awards, while Kilkea Castle in Kildare rounded out the top five.

The Park Hotel in Kenmare and Ballyfin in Co Laois were six and seven with three hotels in Dublin – the Shelbourne, the Merrion and the Croke Park Hotel – also making the top 10.

Ashford Castle – the big sister to the Lodge – in Cong, Co Mayo, was ranked the 48th best resorts on the planet. “The luxurious 82-room property’s long list of amenities include a cinema, cigar room, kids’ playroom, billiard room, and wine cellars. The crown jewel, though, is the spa, which is located in a bronze former conservatory and features a white-and-gold tile mosaic entitled ‘Tree of Life’ next to the indoor pool,” the judges said.

There was also more good news for the castle in Cong, which finished fourth on the list of best resort hotels in Europe, while US president Donald Trump’s hotel in Doonbeg, Co Clare finished in fifth place.

That list was topped by Royal Champagne Hotel and Spa in Champillion, France, with the Terre Blanche Hotel Spa Golf Resort in Provence (also in France) in second and the Ritz Carlton in Tenerife finishing in third.

Adare Manor in Co Limerick finished ninth in the list of best resort hotels in Europe while Dromoland Castle also made it into the top 10.

Ireland as a country almost made it in to a different top 10, finishing 11th in the Condé Nast list of best countries. The country deemed to be the very best in the world was Italy, followed by Sri Lanka and Portugal.

However, none of the countries in the Condé Nast top 20 make it on to a, perhaps, more important list – the green list of countries where Irish people are allowed to visit without restriction.