Interiors: get inspired by international décor

Looking for fresh home ideas? Travel to some of the world’s most interesting hotels and soak up inspiring must-try décor 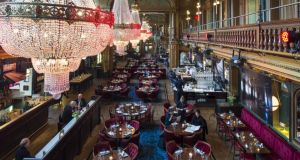 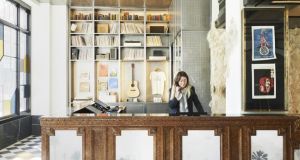 Old and new Scandi styles in Stockholm
Experience Swedish design at the grand old Berns Hotel in Stockholm (above), which was designed by Olle Rex in 1989, but has had several refurbishments since. The public spaces are pure Gustavian splendour, while the bedrooms feature a mix of contemporary and 20th-century Swedish names including pieces by Svenskt Tenn, one of the country’s top interior design companies. Founded in 1924 by Estrid Ericson the firm forged its unique decorative handwriting a decade later when it recruited Austrian modernist architect Josef Frank, who had fled Nazisim in Vienna. Together they build a style that marries pattern and form in its textile and furniture designs. Berns.se/en 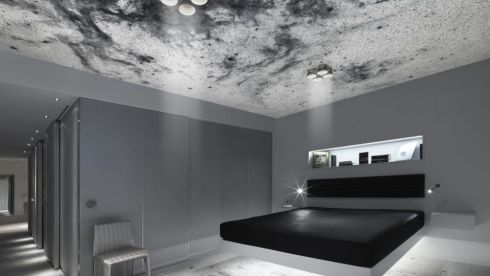 Space odyssey in Zurich
Artist Michael Najjar, who trained for space travel at Star City in Russia, has designed a suite at Kameha Grand Zürich near Zürich airport, that is quite literally out of this world.
You are welcomed aboard by a disembodied female voice that instructs you on how to use the accommodation’s tech, and you sleep in a 2001: Space Odyssey-inspired floating bed while clusters of ceiling-mounted rocket-engine spotlights, a selection of models of historic space ships and photographs by Najjar decorate the space.
Best of all is the negative realisation of the Milky Way, featuring black stars on a white background on the ceiling and floor. In the bathroom, when you look through its small window, the view is of deep space. Kamehagrandzurich.com 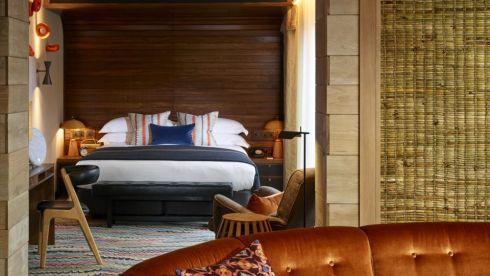 Check in for a décor check-up in London
The Hospital Club in London has a screening room, a venue, a TV studio, a restaurant, lounges and an art gallery, as well as 15 rooms that you can stay in. Founded by Paul Allen, Microsoft co-owner and producer and ex-Eurythmics member David A Stewart, the place exudes a low key, not-trying-too-hard kind of cool. Interior impresario Russell Sage Studios has designed several floors of the building including the new bedrooms. A medical-themed mural in resin by Solomon and Wu welcomes you to the accommodation where Italian-style mid-century velvet sofas compete with op-art rugs to create a home-away- from-home feel to the rooms where works by original artists include Rick Guest’s Royal Ballet performers and bespoke terrariums by Alyson Mowat. Thehospitalclub. com 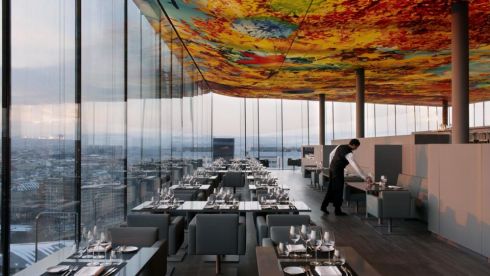 Ceiling the deal in Vienna
Vienna’s Sofitel Stephansdom, designed by Jean Nouvel, is a sloping glass of angular modernity in a city better known for its baroque buildings. One of its most striking features is its rooftop restaurant, Le Loft, where a vibrant video panelled ceiling by Swiss artist Pipilotti Rist competes with the city’s spectacular sunsets for your attention. It is a very effective way to illuminate and decorate from above, on what many designers like call a room’s “fifth wall”. The design brings new meaning to the overused phrase “to think outside the box”. The upscale space can also be admired from the street below. 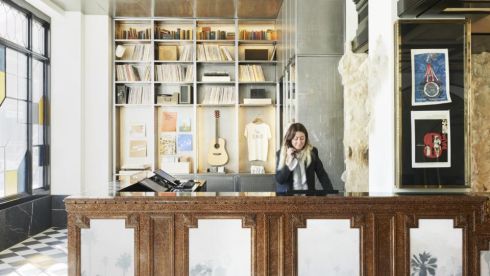 Ace ideas in LA to replicate at home
The Ace Hotel in downtown LA is housed in the former United Artists building and its poured concrete interior is a very contemporary homage, by California-based Commune Design, to that golden age of film straddling 1920’s Hollywood glamour and modern minimalism.

The public spaces feature a bare concrete and wood bar and a black and white restaurant. In the bedrooms colour-blocked blankets cover the beds and the furniture is a mix of mid-century and modern. The use of a desk that doubles as a bedhead is an idea that could be easily replicated in the home. Acehotels.com/losangeles

Multicultural mix in Paris
A former Paris office block has been regenerated as a hip hostel, the largest in the Generator group that has properties in many major cities including a funky space in Dublin’s Smithfield. Situated close to Gare du Nord, it is a feast for the eyes, especially the communal areas. Tom Dixon lights are paired with flea market finds, including seating set on pallets and upholstered using Turkish kilims. The private rooms have Tolix coat racks instead of wardrobes and terraces complete with hammocks, while the dormitories have butterfly chairs and cool wooden stools. Anwar Mekhayech, principal at Toronto-based Design Agency Mekhayech, is the mastermind behind each Generator look. Generatorhostels.com/paris

Monochrome masterclass in Milan
In the bar of the Mandarin Oriental in Milan, architect Antonio Citterio and Patricia Viel Interiors gave the room a sense of the city’s decorative polish with the illusion created by its geometric walls, polished ceiling and shades of upholstered grey furniture set atop a black and white marble floor. The pair say Italian design maestros Piero Portaluppi, Giò Ponti and Asnago and Vender inspired the project, but you can also see the handwriting of painter, sculptor and designer Fornasetti in the monochromatic mash-up of the bar bistro. Mandarinoriental.com/milan