10 of the best easy cycling holidays in Europe

Forget the Alps or Pyrenees, try these less challenging but scenic routes for families and newbies 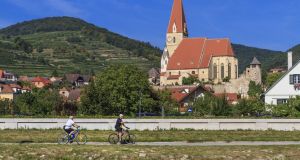 A bicycle lane runs along the Danube river in the Wachau Valley. Photograph: iStock/Getty Images

The iconic river spans 10 countries and 2,850km, and has well-developed riverside cycle paths through Germany, Austria, Slovakia and Hungary. There is no traffic to contend with – other than the 38,000 cyclists who ride the Austrian section alone every year – and tackling it in a downstream (south-westerly) direction means the route is slightly downhill pretty much all the way. Good starting points include Regensburg or Passau in Germany, finishing in Vienna or Bratislava, capital of Slovakia. Alternatively, start in Vienna and cycle the 370km to Budapest, where there are thermal baths to ease aching muscles.

Organised tour: Intrepid Travel has a seven-night guided trip from Budapest to Vienna from around €1,050, including B&B in hotels, bike hire, luggage transfers and entry to the Carnuntum Roman ruins in Austria, and the Esztergom Basilica and Szechenyi Baths, Hungary.

It is possible to cycle all the way across south-west France, from Bordeaux on the Atlantic to Sète on the Mediterranean, following just one river and two canals. Beginners might prefer to pace themselves by cycling the second half, from Toulouse to Sète along the towpaths of the Canal du Midi. At 240km, it is a decent distance, but is flat and can be broken up into manageable stages. The going can be a bit rough and bumpy, so consider investing in a gel saddle cover. Places to spend a night or two include the fortified city of Carcassonne, a short detour from the canal, and historic Béziers.

Organised tour: Belle France has seven-night self-guided trip from Toulouse to Agde from around €1,820, including six days’ cycling, bike hire and support, luggage transfers and half-board accommodation. There is an optional one-day add-on to Sète.

Hilly Tuscany may not be an obvious choice for an easy cycling holiday, but keeping the distances short and adding rest days makes it doable – and the scenery is well worth the effort. Start with a day or two in Pisa, then cycle along the Serchio River to the walled city of Lucca (45km). The next day, cover another 45km to Montecatini Terme, Italy’s biggest spa town, stopping at Collodi and Pescia along the way. Either spend a day in the spa or cycle a circular route around the Medici villas, through vineyards and olive groves, stopping at Vinci to visit the Museo Leonardiano (60km). The final ride to Florence is the longest, at 64km, but it can be shortened to 50km by taking the train to Pistoia and cycling the rest of the way.

Organised tour: The Carter Company has a seven-night self-guided trip, starting and ending in Pisa, from around €1,000 B&B, including bike hire and luggage transfers.

Denmark is very bike-friendly, with 12,000km of cycle routes, safe cycling lanes in cities and largely flat terrain. Cyclists can spend a week following a circular route around North Zealand, known as the Danish Riviera, starting and finishing in Copenhagen – a popular route with families. Cycling anti-clockwise, the path hugs the shores of the Baltic Sea, sometimes turning inland through forests, nature reserves and around lakes, then skirts the fjords – Ise Fjord, Lammefjord, Holbæk Fjord, Roskilde Fjord – before reaching Roskilde. Daily distances average about 45km, and there are lots of beaches and coastal villages to stop at. Attractions en route include Kronborg Castle (Elsinore in Hamlet), and Roskilde’s cathedral and Viking Ship Museum.

Organised tour: UTracks has a seven-night self-guided trip from around €1,295 (€935 for children), including B&B, bike hire and luggage transfers.

The Southern Black Forest Cycle Route is a 248km circular journey beginning and ending in Freiburg. The asphalt path follows a former railway line and is suitable for families, including those with young children in trailers. The route is mainly flat, with a few minor hills in the forest (a short train journey from Kirchzwarten to Titisee Lake on the first day cuts out the only steep section). The scenery is a mixture of forest and farmland, with a couple of days spent riding alongside the Rhine and the last day through vineyards. Cyclists can spend the nights in small medieval towns, and take a short train ride across the Swiss border for a night in Basel.

Organised tour: Flexitreks has a six-night self-guided trip from around €543 B&B, including luggage transfers and train to Basel; bike hire €78.

Cyclists can visit the three countries that share the Istrian peninsula on a week-long ride. The terrain is slightly hilly but distances are short, averaging 40km a day. The route starts in the Italian port of Trieste, then heads south on a coastal cycle path to pretty Piran in Slovenia. From here, it winds through the Secovlje salt pans, then crosses into Croatia. Continuing south, places to spend a night include Umag, a medieval walled town; Porec, with its sixth-century Euphrasian Basilica; and Rovinj, probably the most picturesque town on the peninsula. The path hugs the coast all the way down to the final stop, Pula, known for its well-preserved Roman amphitheatre. Fažana, 8km north of Pula, is the embarkation point for ferries to the Brijuni Islands.

Organised tour: Zenith Holidays has a seven-night self-guided trip from around €930 B&B, including bike hire and luggage transfers.

The Netherlands is paradise for cyclists: almost completely flat, with courteous drivers and segregated cycle paths everywhere. Cycling from Amsterdam across the border to Bruges, in equally bicycle-friendly Belgium, is perfectly possible in a week, but the distances are a little challenging: the first day’s ride, from Amsterdam to Gouda, is 80km. Another possibility is an organised bike and barge trip, sailing some of the way and cycling the rest, and eating and sleeping on board. A typical itinerary would involve rides of about 40km a day, spending nights in Dordrecht, Antwerp, Dendermonde and Ghent. From Bruges, there is a 37km loop to the beaches of the North Sea coast. And if it all gets too much, there is the option to skip a day’s cycling and stay on the barge.

Organised tour: Saddle Skeddadle has a seven-night guided bike and barge trip from around €1,040 full-board.

Way of the Roses, Lancashire to East Yorkshire

Not ready for Land’s End to John O’Groats just yet? The Way of the Roses is a challenging but rather more manageable long-distance ride: 275km from Morecambe on the Lancashire coast to the seaside town of Bridlington, East Yorkshire. The route follows quiet country lanes, disused railway lines and cycle paths. There are some tough climbs in the Yorkshire Dales, and the highest point, Greenhow Hill, near Grassington, is 400 metres above sea level. But after this (roughly the halfway point) the hills get smaller, and beyond Ripon the route is largely flat. The varied terrain includes the Forest of Bowland, the Nidderdale AONB, the Vale of York and the Yorkshire Wolds; the first day’s riding goes through Lancaster and the fourth day ends in York. Based on a six-day ride, the average daily distance is 46km.

Organised tour: Open Road Open Skies has a five-night self-guided trip from around €500 B&B, including luggage transfers; bike hire is an extra €55.

There is a corner of eastern Catalonia, south of the Pyrenees, where the hills slope down to a fertile valley that is flat and ideal for cycling. Starting inland in the Garrotxa region, cyclists can explore the meadows, woods and hamlets along the via verde (cycle path) and country roads. Near the town of Les Planes d’Hostoles, there are waterfalls to cool off in. The off-road continues right into historic Girona, where it is well worth spending a couple of days exploring sights including the Gothic cathedral, Jewish quarter and city walls. The final stretch leads to the Mediterranean, finishing at the upmarket resort of s’Agaró on the Costa Brava.

Organised tour: Inntravel has a seven-night self-guided trip from around €1,145 B&B, including four dinners, bike hire and luggage transfers.

Lake Constance is bordered by Austria, Germany and Switzerland, and a 168-mile cycle path encircles the lake, allowing cyclists to visit all three countries on a week-long trip. The path is well-maintained and signposted, and is suitable for families and beginners. The route goes through forests, farms, vineyards and orchards, past cathedrals, castles and convents, and there are views of the Alps as well as the lake. Highlights include the Unesco-listed monastic island of Reichenau; the historic towns of Meersburg and Lindau; and the wildlife-rich Rhine delta. Cyclists can cool off with a dip in the lake or one of the summer lidos. It is best to ride clockwise, breaking the journey into four or more stages.

Organised tour: Headwater has a seven-night self-guided trip from €1,280, including B&B and five dinners, bike hire, luggage transfers and ferry from Staad to Meersburg.

‘People fear me as much as I fear them’: The reality of life under lockdown
Real news has value SUBSCRIBE