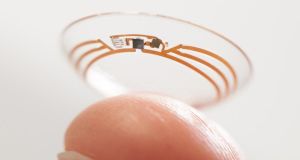 Undated handout photo issued by Google of a Google smart contact lens that can monitor the glucose levels in the eye is a step closer to reality as the company has announced a partnership with Swiss pharmaceutical company Novartis to develop it. Photograph: Skyscanner/PA

A smart contact lens that can monitor the glucose levels in the eye is a step closer to reality as Google has announced a partnership with Swiss pharmaceutical company Novartis to develop it.

The technology giant first unveiled the concept in January, which works using tiny sensors and microchips fitted into contact lenses that can then measure and read the amount of glucose in tears, before sending the information to a mobile device so diabetics can manage their condition.

While there is no concrete data on the number of diabetes sufferers in Ireland, the Institute of Public Health estimated that there were about 143,000 people with diabetes in the country in 2007 and predicted that this number would increase by 37 per cent, to 194,000 people, by next year.

Google co-founder Sergey Brin said: “Our dream is to use the latest technology in the miniaturisation of electronics to help improve the quality of life for millions of people. We are very excited to work with Novartis to make this dream come true.” The move will see Novartis’ eye care division, Alcon, which develops contact lenses, work with Google on making the technology commercially available in the future.

The announcement is the latest in a string of futuristic projects that Google has undertaken over the last year. The company has launched Google Glass, its wearable headset that has its own range of apps that work within the wearer’s field of vision, and has also begun trialling driverless cars on the streets close to Google headquarters in California.

All of these projects come from the Google X lab, the company’s infamous creative space where staff are encouraged to come up with “moonshot” ideas for new ventures. Novartis CEO Joseph Jimenez said: “We are looking forward to working with Google to bring together their advanced technology and our extensive knowledge of biology to meet unmet medical needs. This is a key step for us to go beyond the confines of traditional disease management, starting with the eye.”

In a statement, the Swiss company said their focus would be on two areas of the technology, to help diabetic patients manage their condition, but also to offer some vision correction to those who are short-sighted. “For people living with presbyopia who can no longer read without glasses, the ”smart lens“ has the potential to provide accommodative vision correction to help restore the eye’s natural autofocus on near objects in the form of an accommodative contact lens or intraocular lens as part of the refractive cataract treatment,” said a Novartis spokesman.

Neither company has placed a time frame on the development of the lenses, with Novartis stressing that there were no guarantees a commercial product would ever be launched, and that more development was needed on both sides. Earlier this year at the Wearable Technology Show in London, futurist Dave Evans suggested that smart contact lenses would come into existence before humans would start to replace parts of their bodies with technological “upgrades” over the coming decades.