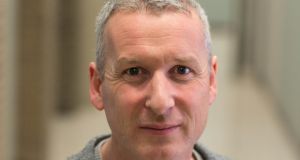 Prof John Foxe: believes incoming signals get combined early on as they are processed in the brain – much earlier than had been previously suspected. Photograph: Jason Torres

When you listen to someone talking in a noisy room, you hear what they say. But you most likely look at them too – seeing their mouth move could be the difference between understanding them and not.

And when you type, you not only touch the keyboard, but you see and hear it as you tap out the letters.

Our brains integrate inputs from several senses to figure out the world around us, and Irish researcher Prof John Foxe has been making inroads into understanding how that happens.

“When we are walking around as normal, maybe doing the shopping, we are getting information into our bodies and brains from all the senses,” says Foxe, who is professor of paediatrics and neuroscience at Albert Einstein College of Medicine in New York. “And when you see an object, you may also reach out and touch it and listen to the noise that it makes.”

Sensory signals
Meshing those sensory signals together can give a result that is bigger than the sum of its parts, he explains.

“If you have only a visual input or only an auditory input, you get a certain amount of information from each. But when you get the two together, it’s not just the simple sum of the two. Instead, you get a multiplicative effect, the extraction of information is often much better than would be predicted by either sensory system alone.”

Years ago, Foxe’s lab made a discovery that challenged how the brain knits together these inputs from multiple senses.

It suggested incoming signals get combined early on as they are processed in the brain – much earlier than had been previously suspected.

It didn’t go down too well at the time, he recalled at a lecture earlier this month in Trinity College Dublin. “Some people actually walked out of a conference talk where we were presenting the results,” he told the audience.

But to Foxe’s relief, subsequent experiments by others also reflected this more rapid integration of multiple sensory inputs in the brain.

“People stopped yelling at us, and there was this paradigm shift, it turned the field on its head.”

Foxe, who is originally from Ballygall in Dublin, has since been looking at how children with autism integrate multiple sensory signals. “One of the hallmarks [of Autism] is a sensory defensiveness, like covering your ears on hearing an ambulance passing far away, almost as if in physical pain over it,” he says.

His research group compares sensory integration in high-functioning children on the autistic spectrum (mostly boys in this case) and in matched “neurotypical” children.

Their findings suggest the neurotypical children develop the ability to rapidly integrate multiple senses around the age of seven to nine, but the children on the autistic spectrum do not fully develop this ability until well into their teens.

“We don’t know what the impact of that delay could be,” he says. “But now we are able to look more at the mechanisms of sensory integration and find out if there is something different in autism – can we establish what it is and measure it as a child goes through therapy to see if that therapy is making a difference? We haven’t been in a strong position to do that until now.”

“Early diagnosis and getting started as soon as possible with therapies can make a huge difference in these children,” explains Foxe.

“So we want to develop electrophysiological markers that can identify kids maybe even in infancy – you do some [non-invasive] brain tests and identify the kids who we should really be watching for any developmental delays, any issues with language.”

Foxe has been finding that girls and boys with dyslexia do not integrate the information from multiple senses in the typical way. It stands to reason, he explains. “When you learn to read, you need to join the sight of words and the sounds they make. You have to learn the cross-sensory associations, so it’s no big surprise that we found sensory integration issues when we looked at children with dyslexia.

“There’s a large window in infancy and toddlerhood within which to identify this multi-sensory deficit and target those kids as soon as is feasible for therapy.”

But he cautions that for use in both autism and dyslexia, much research and validation still needs to be done, including more studies that track individuals over time.