Trained therapy dogs can have a beneficial effect on people with health issues, from autism to dementia 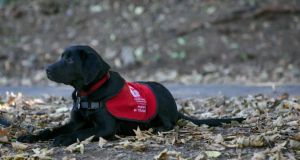 Elmo, an assistance puppy in training with Austism Assistance Dogs Ireland: children often speak around a dog where they might struggle with an adult or peer

Irish Guide Dogs announced two weeks ago that it had been forced to close the waiting list for its autism assistance programme due to overwhelming demand. The organisation said the waiting list had become unsustainable – standing at over two to three years – and there was not the human or financial resources to add more people to the waiting list.

There is pressure on similar services countrywide so those lucky enough to have the help of an assistance dog or to be visited by a therapy dog are well aware of the companionship, calm and comfort such dogs can bring.

Like guide dogs, assistance dogs are clearly marked and trained to remain calm in different environments. Autism Assistance Dogs Ireland in Mallow, Co Cork, has 12 assistance dogs that have been placed with children with Asperger’s, autism and those on the autistic spectrum nationwide.


Popular breeds
The temperament and the height of the dog is important because, when out walking, the child holds onto a handle on the dog’s jacket and the parent or guardian holds the dog’s lead. The most popular dogs used are Labradors, Golden Retrievers and some crossbreeds.

The dogs cost €15,000 between training, fostering and veterinary fees, says Nuala Geraghty, training services manager of Autism Assistance Dogs Ireland, but are provided free to the families who are then encouraged to help with fundraising.

The assistance dogs are placed as puppies at eight weeks with a volunteer foster family who rears them for 12 to 15 months. The puppy wears a red jacket and can go anywhere. “The idea is to take the dog to as many places as possible to get it used to different environments – forests, beaches, the cinema – and to other dogs and people,” says Geraghty.

Geraghty herself then takes the dog for its specialist training, teaching it to walk on a relaxed lead, to stop for all kerbs, take right and left turns, learn to recall and have good social behaviour.

Autism Assistance Dogs Ireland has a waiting list of five years but says early intervention is essential. “Placing a dog with a child at four or five is much more effective than with an older child,” says Geraghty.


Positive experience
Gráinne McGrath’s son Thomas (7), who has autism and a moderate learning disability, owns Nana, a Golden Retriever trained by Autism Assistance Dogs Ireland. He has had Nana for two years and McGrath says that one benefit is that Thomas’s autism becomes more obvious to people who then become more positive and accepting of him. “Before we got Nana I had to use a strap around Thomas’s wrist for safety, which is hard to explain to people, but now it’s a more positive experience going out and about. Because he is attached to the dog by a belt and holding onto the handle he feels responsible for the dog in a sense.” She says Nana has brought huge benefits to Thomas. “He definitely has come out of himself more and is saying a lot more than he was before we got the dog.”

The ability of children to speak around a dog where they might struggle with an adult or peer is evidenced in Fiona de Buitleir’s reading class at Ennis National School, Co Clare. It is a special reading class for children of fifth and sixth-class age with average or above-average intelligence and severe dyslexia. The children come from all over the county and are proud to have Mackey,the chocolate brown Labrador (accompanied by owner Hilary O’Sullivan), lend a furry ear.

“If you can imagine a dog smiling she certainly seems to smile at the kids and they at her,” says de Buitleir. “They don’t particularly like reading because it’s difficult for them but when they are reading to Mackey they don’t realise they are reading. If they are stuck on something or there’s a big pause it doesn’t matter – she just keeps wagging her tail, so there’s no negativity in the experience.”

The children sit on a beanbag and pat Mackey while reading aloud. “There is a touch therapy aspect to it too and children who find it very difficult to read in a different setting will read away good-o with Mackey. It’s about having a safe space to read in,” says de Buitleir. “She’s even been in the school play!”

Animals from Irish Therapy Dogs perform a similar function in that their weekly visits bring a sense of comfort and companionship to those in over 200 care centres. The 300 visiting teams – dogs and owners – are all carefully assessed and Garda-vetted.

Brenda Rickard, chief executive of Irish Therapy Dogs, says the dogs are never pushed on a client but neither is anyone ever excluded. “We treat everyone with respect and dignity. A dog brings such love and people can hug the dog and it brings out their emotions. The dog doesn’t judge them and perhaps encourages them to have more interest. Some people don’t have visitors and it gives a bit of structure and they look forward to the visits.”

Each week three teams from Irish Therapy Dogs, dressed in trademark yellow uniforms, go to St Patrick’s Mental Health Services in Dublin where they visit adults with a range of mental health difficulties including depression, anxiety, addiction, eating disorders, bipolar disorder and memory impairment. Sherrie Buckley, occupational therapy manager at St Patrick’s, says of the dogs, “Often it takes them longer to get out of the hospital because so many people want to pet them.”


Stress reduction
“We know that a lower heart rate decreases stress. Psychologically it provides a huge comfort to a lot of people,” says Buckley. “We have pet owners who really miss their pets. It’s a therapeutic sensory activity to pet a dog and is very therapeutic for a lot of our service users. The visits are timetabled so everyone knows when the dogs are coming and can opt out if they wish – the ladies who have the dogs are very respectful of people’s wishes.”

The dogs are handled by one person at a time but in a group setting. “It encourages great interaction – sometimes you have people who are quite withdrawn so it brings them out a bit,” says Buckley. “One lady who has advanced dementia was almost non-verbal but would sing to the dog.”

Anne* (59) is a client of St Patrick’s. She believes that the dogs have provided great comfort and entertainment and says that they are especially valuable perhaps to elderly service users who may never have visitors and look forward to the weekly visits.

She says the dogs are both a source of entertainment and interest and help service users to get acquainted with each other and become more engaged.

Louise* (37) takes part in St Patrick’s bipolar programme and is on medication for her condition. She says that that the dogs’ visits have had a greater impact on her than other therapies in terms of reducing her anxiety and stress levels.

“The dogs give you a sense of calmness,” says Louise who, as a pet owner, had lost interest in her own dog but now takes care of him again.

“The medication was blocking out my thoughts and feelings for anything but when the dogs were around that stopped,” she says.

“My mood definitely picked up when the dogs had been in. It’s a combination of being comforted and being motivated by the dogs. It’s done wonders for me. They are not judgmental – sometimes you feel that the dog feels what you feel.”


*Names have been changed