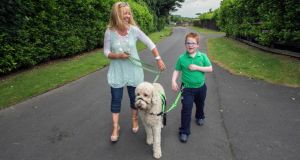 Eleanor Bermingham with her son Mikey and their dog Ralf near their home in Citywest Dublin. Photograph: Brenda Fitzsimons 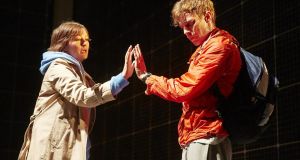 The Curious Incident of the Dog in the Night-Time in the West End. photograph: Brinkoff and Mogenburg

‘It can be difficult to be in a public place when you have a loved one with autism,” says Jennefer Cullinan, social media officer with Irish Autism Action. “People with autism are easily overwhelmed by outside stimuli, such as bright lights and crowds, and can often cope for only a short time before getting upset and having a meltdown.”

Cullinan, who is the mother of a child with autism, has first-hand experience of how difficult such a scenario can be. “Autism is an invisible disability,” she says, “and people can be very quick to judge you if your child is having a meltdown, as we call it, because to an outsider it just looks like a tantrum. When the nervous system is overwhelmed, an autistic child might react by lying on the floor or screaming. The perception is that you just have a naughty child; but the child has no control over it.”

In her professional role and as a parent, Cullinan has been involved in creating opportunities for families with autism to participate in artistic experiences that might be difficult for them in their usual context. A variety of arts organisations and venues have responded to this expressed need by organising special screenings or relaxed performances that take into account the needs of an autistic audience.

The films are primarily aimed at an under-12 audience, but a recent live streaming of the National Theatre Live’s The Curious Incident of the Dog in the Night-Time, a stage adaptation of Mark Hadron’s bestseller about a 15-year-old with Asperger’s syndrome, was such a success that it was screened twice.

Meanwhile, the Ark cultural centre for children in Dublin has provided autism-friendly performances in its varied theatre programme since 2012. Maria Fleming, the Ark’s theatre programmer, says theatre poses a particular set of potential stressors for the autistic child.

“Traditionally, the theatrical experience is shaped around storytelling, tension and surprise,” she explains. “For an autism-friendly performance we adapt the theatrical environment to make it less daunting.”

Sudden changes in lighting are muted, loud noises are softened, doors are left open throughout the show and pre-show announcements usually delivered by tannoy are given by theatre staff to minimise confusion for children who may find the disembodied voice upsetting. Ear plugs are made available and fidget toys [stress balls] are also provided to enable them to cope with any onset anxiety. As Fleming realised after the Ark’s first autism-friendly performance, “for relatively little change we can make a significant difference to someone’s accessibility to culture”.

More recently, the National Concert Hall has been hosting experimental concerts for children with autistic spectrum conditions. They are designed by the composer Slavek Kwi, who mixes installation elements with classical interludes and field recordings to create an immersive environment reflective of exotic landscapes.

Maria Fleming relays an anecdote that she came across in her research while she developed an autism-friendly programme at the Ark. The Polka Theatre in London was one of the international leaders that she consulted as part of her research, and after a while they began to see a fall-off in their relaxed performances. They contacted families to see why they were deciding not to return. The response was that they were still attending the theatre regularly, but their children didn’t need special conditions any more.

By making their performances accessible, it seems, theatres and cinemas are shaping an audience for the future too. Autism-friendly screenings take place regularly at Cineworld, Odeon and Vue Cinemas. For information about forthcoming autism-friendly performances at the Ark, see ark.ie. The National Concert Hall will host AfriKaa! for children with autistic spectrum conditions on November 8th, see nch.ie.

Reel break: It gives him, and us, a lease of life at weekends

My son Mikey is seven. He is at the more severe end of the autistic spectrum, and has a lot of behavioural and sensory problems. He is very sensitive to lights, and gets upset at loud or sudden noises such as a lawnmower. When he gets overwhelmed he covers his ears, and he might start “stimming”, jumping up and down flapping his hands. He can get very aggressive and disruptive and, because he doesn’t look any different from other children, people think he is just a badly behaved child. We go to the sensory friendly screenings at the cinema and the National Concert Hall a few times a year, and it is great to be with people who are in the same boat as you, where there is no judgment.

Mikey is not great at sitting still, even for five minutes, and the first time we went to the cinema with him we didn’t stay very long. I used to watch out for his runners lighting up in the aisles. But now we stay for the whole film and he can sit for nearly 90 per cent of it. I am confident that Mikey would be almost able to go to a typical screening now, because we have had the chance to give him a very slow, gentle exposure to it.

Between all the different cinemas there is a film showing nearly every week. Mikey wouldn’t have much grasp of storyline or language, but he loves the colours, the music, and anything with cars or action. He is a real sensory seeker. He likes a thrill and a zoom.

And he loves the familiar routine of it: his popcorn, his drink, his friends. It gives him, and us as a family, a lease of life at the weekends. He is entitled to a social life just like every other child.