‘Lockdown, The Sequel’ is just nowhere near as enjoyable as the original 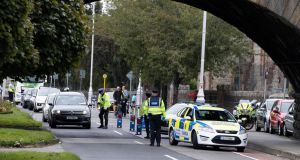 Coronavirus restrictions: A view of a Garda checkpoint in Fairview, Dublin over the weekend. Photograph: Tom Honan/The Irish Times

Welcome, Dubliners, to Lockdown, The Sequel. Please sanitise regularly and remember that sequels, however much they are hyped, are never as strong as the original.

The original Lockdown, while surreal and scary, was full of resolve and solidarity and the notion that we would prevail and flatten the curve or smash the virus. It was a time of Zoom quizzes and online locktail-making classes, which seem quaint and faintly mortifying now.

We stood firm back then in our locked down houses, stocking up our pandemic pantries, tending sourdough starters and diligently avoiding each other on pavements. Most of us didn’t know much but some of us knew one thing: it would all be over by Christmas.

It won’t be all over by Christmas.

(“Maybe next Christmas?” my daughter asked yesterday and I pretended not to hear.)

Welcome, Dubliners, to Level 3. Think of it like a video game but a counter-intuitive one because your mission is to avoid getting to the next level.

In Level 4 there are no visitors to your house and it’s one level closer to the schools closing which – in a world of no guarantees here’s one certainty – would send those of us who aren’t there already completely over the edge.

One of the problems is that everyone has a different way of playing. Some people are still having parties or to make them sound less infectious “gatherings”; other people have wildly differing interpretations of what “one household” and “six guests” means.

And while back in the spring, you got filthy looks for not social distancing, there are some people who have clearly forgotten what two metres looks like and others who don’t seem to care.

And there are those who refuse to play the game. The man driving the taxi I got last week wasn’t wearing a mask. There was no glass screen between us. I had a mask on, my sunglasses fogging up on that warm September day when Dubliners waited to move from Level 2 (and a bit) to Level 3, like people stuck in a lift.

“Do you want me to wear a mask?” the taxi driver asked. I told him it was mandatory now, but he said it wasn’t and that not one passenger had asked him to wear one and then he drew my attention to the YouTube video he was watching on his phone, perched up on the dashboard, while he was driving.

There was a conversation being had by two shouty people who agreed with each other, the gist of which was there is no pandemic and we’re all sheeple and the virus is a bio-weapon.

The driver remained maskless. We were on a busy road and I didn’t fancy getting out, so I said nothing, pretending I was listening to something else on my headphones all the way home.

The acoustics of the game need tweaking. The room in Dublin Castle where one of last week’s political briefings took place was echoey like a church and the men on the podiums sounded like they were preaching to a congregation they couldn’t see.

Remember your four Ws, Bishop Leo said, something about Washing hands and Watching your distance. Or maybe it was Fr Donnelly who said it just before he self-isolated fearing he had the virus. I don’t think it was Cardinal Micheál Martin but he did say “this too will pass”, a genial quote-a-day desk calendar on legs.

We’re in a different pandemic place now. Nobody is quoting Seamus Heaney, for example. The time for motivational poetry and pop-culture references, all the better to reach the younger folk, seems to have passed.

You can always rely on Leo Varadkar for a bit of vintage pop-culture though. When he got a smoothie thrown on him in the park, while making a snappy informational video about Level 3, he compared his attacker to Avril Lavigne.

The young woman who threw the smoothie was carrying a skateboard under her arm. Lavigne had a pop hit 18 years ago with a song about a boy who liked skateboarding and a girl who rejected his romantic advances. Could he make it any more obvious?

I say there’s no more poetry, but Van Morrison has been valiantly trying to capture the zeitgeist with songs my mask-denying taxi-driver will love. “No more lockdown/ No more government overreach/ No more fascist bullies/ Disturbing our peace”. “Overreach” is a word that has probably never been used in a song before, so there’s that.

The President, Michael D Higgins, celebrated Van the Man’s 75th birthday the other week by reading out one of his poems Rave On, John Donne. The President made his own Rave On video as a tribute, his eloquent Rrrrs rolling with abandon as the disembodied heads of dead writers swirled around him. I wonder what the President is thinking about Van’s ravings now.

Anyway, these days, there is no such thing as raving on. While I’ve never enjoyed a rave, I feel for the people on social media reminiscing about crowds of hot, sweaty bodies mingling in confined spaces, moving to loud music. You miss what you miss.

Level 3 was announced and the misses mounted up. The beleaguered restaurants closed for indoor dining again and we cancelled all plans outside the county. Then the President’s dog, Síoda, died. We mourned her and it felt like we were mourning everything.

This past weekend I tried to hold on to encouraging things. In a much quieter Dublin city-centre, it’s those restaurants who are managing to find more outdoor spaces. The friends who are determined to support them by doing less home-cooking and ordering more takeaways. Micheál Martin on the radio sounding human and reassuring, talking about walking down to Toonsbridge Dairy on George’s Street in Dublin for his messages to get a “a bit of Cork” and on the way a supportive Dubliner in a Liverpool jersey telling him to “lock her down”. The “her” being Dear Old Dublin town.

In search of solace, I rang my mother to take a sip from a glass she has, the one that’s always half-full. “It’s about reducing the cases, protecting each other, limiting our contacts. Level 3 is only for three weeks. We can all do that”.

What we can’t do is click a button and leave this pandemic.

It’s not that kind of game.

Elizabeth Gilbert: When a magical idea comes knocking, you have three options
10