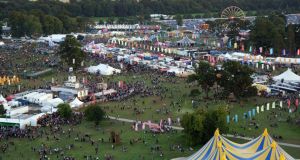 On day three of Electric Picnic a middle-aged man with a trilby, patchwork waistcoat and bushy beard is telling his friend how he’s bearing up. “It’s my feet, that’s where I feel it. Do you feel it in your feet?” His friend has a think. “No. It’s my lower back. The backs of my legs, maybe. And I’ve a slight twinge in my shoulder. But otherwise I’m grand.”

There’s a widely held view that it’s a middle-aged party but from where I was standing (listing, at some points) the Electric Picnic is a young person’s game. There’s just no getting away from the fact that going to the picnic past the age of 40 constitutes a three-day endurance test, a kind of alternative Ironman competition but with burritos and people dressed as bananas.

Physical and olfactory discomfort is inevitable but there will also be rewards from the culinary to the spiritual. So this column is for you 40-somethings who have a hankering for the picnic experience but fear you might be past it. I’m writing it a year in advance so that you can factor the tickets (already on sale) into your annual budget along with the water charges and the property tax.

First of all, I recommend travelling with a young male companion because they can double as a Sherpa in an emergency. You won’t see your young companion for three days because they will be off with people their own age who don’t say “oof” when they get up from a sitting position. But unless they are having so much fun that they lose their phone, they will always be just a call away. And that is comforting.

Eventually after a jolly bus ride you “arrive” at the Picnic. But do not be fooled. “Arriving” at the picnic is only the beginning of your journey. You need to be mentally and physically prepared for this fact. You will now schlep through fields in the dark for what seems like miles. You are not chatting blithely with your young companion anymore. You are watching the girls in their denim hotpants up ahead and thinking: “I am 42. What am I doing here?”

You finally make it to the entrance gate where you exchange your ticket for a wristband. But you still haven’t arrived. You trudge through packed campsites called Jimi Hendrix and Oscar Wilde, tripping over tent ropes. You are over 40 though and you are not staying there. You are going to a place called Boutique Camping for people prone to twinges. There are tents shaped like Wendy houses and beehives there. You are home.

Lots of things will happen over the next three days. You’ll hear some new (well new to you anyway) music that you will want to download the minute you get home: Hozier, Woman’s Hour, All We Are. In one tent you’ll have brilliant encounters with polite, friendly and happy young people at a cafe called Salon du Chat where instead of food and drinks the courses are conversation topics like Guilty Pleasures and Lead In the Water. In another tent a verbally dexterous man is reciting a poem about coming up and coming down. You leave your sunglasses somewhere along the way and a young man runs out of a tent, tracks you down and hands them back.

In all this time you won’t feel out of place because dotted among the masses of youthful exuberance you’ll spot people even older than you. Yes, there are several people pushing wheelbarrows full of tiny children but there is also a 75-year-old woman singing every word of every song along with Nile Rodgers, including Like A Virgin. It’s inspirationally intergenerational, a pop-up community of free spirits spread out across a field.

Eventually, you will get tired trudging between areas called Body & Soul and Other Voices, Salty Dog and Trailer Park, Mindfield and back to the Main Stage 728 times a day. Come day three, all you might feel like is a nice lie down on the grass. And just then the incomparable Sinead O’Connor will appear singing John Grant’s song about hairlines receding like self-confidence. She’ll wrap her two arms around her daughter Róisín as they sing a duet together. At that point you become an emotional mess reclining on the grass.

It’s nearly over now. Your feet and wellies have welded together as one. Your young companion/ Sherpa has had so much fun he’s lost his phone. You trudge alone to the bus where you make more new friends, laughing with smart, charming and noisily feminist 20-something students Rachel, Annah and Fionnuala all the way back to your real life. They swear blind they thought you were 20 when you tell them you are 42. You don’t care if they are lying. You get home. Dump your camping gear in the hall. You fall into a heavy sleep muttering “never again”. But even your blistered toes know you’ll be back next year. roisin@irishtimes.com