The naturist trail: ‘Once you try it, there’s no going back’

Pat Gallagher, president of the Irish Naturist Association, and his wife, Mary, are among the few in Ireland willing to speak publicly about the lifestyle. They started off by accident, says Pat 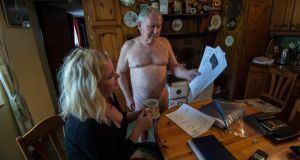 Pat Gallagher at his home in Roscommon, with Fionola Meredith. Photograph: Brenda Fitzsimons 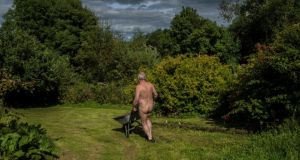 Pat Gallagher at his home in Roscommon. Photograph: Brenda Fitzsimons 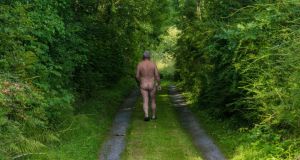 Pat Gallagher at his home in Roscommon. Photograph: Brenda Fitzsimons

You might think that nudists would be fairly visible and easy to track down. Isn’t there a latent exhibitionism in casting your clothes to the wind and stepping out mother-naked into the sunshine? An out-and-proud statement of personal freedom? But when I set out to find them, it turns out that many Irish naturists are keen to keep their identities, if not their bodies, firmly under wraps, and at least some of them are as slippery as eels.

A prospective encounter with a secret group of nudists from north Co Antrim looks promising until it becomes clear that the price of meeting them was the surrender of my own clothes, in the interests of creating “a level playing field”.

“Go on: dare to bare,” they repeatedly urge me. When I decline, pleading a preference for private nudity – I have no problem leaping naked into the surf on a remote Donegal beach, and have done so, but I don’t want anyone else around to watch me do it – the trail suddenly goes cold.

Or perhaps the Antrim naturists simply got cold feet. It wouldn’t be surprising, given the punitive attitude towards nudity in the North. Last month, following the apprehension of two skinny-dippers who were caught cooling down in the sea in Holywood, Co Down, during a heatwave, the PSNI warned anyone else thinking of stripping off that they could end up with a criminal record and a place on the sex offenders register. It seems that the sight of a naked body, particularly if it is male, is still regarded as an affront to decency by many, carrying the power to shock, traumatise and corrupt the innocent. No wonder the nudists are lying low.

Then I hear about a man called Pat Gallagher, president of the Irish Naturist Association. Pat is one of the few nudists in Ireland who is willing to speak publicly about his preferred lifestyle, to put a face, indeed a whole body, to his name. He lives with his wife, Mary, in the green depths of Co Roscommon and he’s happy to meet and talk. “Great,” I say, “I’ll take a trip down to see you.” We arrange to meet outside a bar in a tiny village, because he says I’ll never find his house if he doesn’t show me the way.

Finding the village, let alone the rendezvous point at the bar, requires much confused driving up and down identical-looking country roads, criss-crossing the county borders between Leitrim and Roscommon, reversing to check signposts and staring at the “no service” message on my mobile, while trying – fruitlessly – to access Google maps.

When I finally get there, Pat is waiting patiently in his car by the side of the road. He is wearing his Irish Naturist Association T-shirt. “Keep close behind me,” he says. “It gets a bit wild and woolly on the way to the house.”

He’s not wrong. We turn into a long lane skirting remote bogland, which turns into an even longer, grassier, bumpier lane, the tussocks grinding on the underside of the car, overgrown brambles slapping the windscreen. Not a single sign of human habitation to be seen for miles around, just the bog stretching away into the distance, and a field of buttercups shining yellow in the sun. There could be no better place for a naturist to live in peace with himself and the world around him.

When we arrive, Mary is ready with tea and biscuits on the patio and Missy the Labrador bounds up to say hello. The couple, who are now grandparents, have enjoyed going naked for almost all of their long married lives. Former city dwellers, the seclusion of their country home means that they and their like-minded friends can strip off and walk around unclothed all day, with no fear of prying eyes.

“We started off by accident, really,” says Pat. “We used to get the lend of a caravan near a beach in Wexford in early June and we always seemed to get a week of lovely weather. There were never many other people around. I suppose we just started to relax and to realise that the only reason we were wearing these pieces of clothing – bathing costumes, all wet and heavy and sticky with sand – was to suit other people.”

So you decided there and then to take them off? The couple nod, smiling at each other. “I always hated that feeling of sand in your togs and trying to get changed with a towel clamped around you,” says Mary. “It was great to let all that go.”

Later, they became members of the Irish Naturist Association and founder members of the Dublin-based Club Aquarius, which meets every month for a get-together at a swimming pool.

Mary remembers that she was three months pregnant when she attended her first nude event. Didn’t she feel strange or self-conscious? “No, not really, because you quickly see that every type of person is there: big and small, fat and thin, young and old. And then once you try it, there’s no going back.”

“It’s a personal thing,” says Pat. “A freedom that you enjoy in the proper surroundings – on a quiet beach, not in your local pub on a Saturday night.”

Eamonn, a friend of the Gallaghers from Club Aquarius (he doesn’t want to give his surname), says that, for him, getting naked is about getting back to nature, an activity he has relished since his earliest days.

“Naturists just want to go the beach and enjoy themselves and not bother anyone, put a windshield up and have a picnic. We’re always getting asked if the men get aroused, but that’s not an issue at all. It just never happens. It’s a natural situation, not a sexual situation.”

Eamonn has a theory that naturists are healthier people than the majority clothed population, or “textiles” as they’re known in the lingo. “They’re just more relaxed as people, you know? None of that guilt around the body. You never hear of any teenage pregnancies, or anything like that. It’s a healthy pursuit.”

While the INA identifies 23 Irish beaches where naturism is effectively tolerated, and no member of the association has ever been prosecuted, nude swimming or sunbathing in a public place remains illegal in Ireland. Ireland is the only European country not to have an official nudist beach specifically designated by any local authority or council.

“One of the reasons that the law takes an interest is that people say they are offended,” says Eamonn wearily. “So we are the only species on the face of the Earth to be offended by the sight of another member of that species? It’s just ridiculous.”

Pat has spent decades campaigning against the prohibition on nudity. He drags out two giant scrapbooks, filled with old letters and yellowing press cuttings that document the long struggle for recognition and at least one beach to officially call their own.

“A lot of people enjoy naturism but they don’t want to stand up and be counted,” he says. “I’m a hands-on person. It’s just a funny quirk in my personality: I won’t take anything on and not finish it. I do get burned out every now and then, but then it all kicks in again and I keep on going.”

The naturist movement in Ireland is gaining ground. Next month, the 34th International Naturist Congress, hosted by the INA and supported by Fáilte Ireland, will be held at Lough Allen Spa Hotel in Drumshanbo, Co Leitrim. It is a matter of some pride to Pat and his friends, because it is the first time that the congress has been held in Ireland. Nudity will be part of the proceedings, of course, but only after the meetings are over. The congress is effectively the naturist world’s global agm, and there is serious business to discuss, especially around nudist tourism, which is worth billions worldwide, especially in Spain, France, Portugal and Croatia.

I knew I wouldn’t be offended when I saw Pat naked, although I thought I might be embarrassed, unsure of where to look or what to say. But after a moment of adjustment, in which I register the presence of his nude body, it feels perfectly – surprisingly – normal.

Standing in his garden in the late summer sunshine, he seems part of the nature all around him: the bees, the fuchsia, the apple tree, the ripening blackberries. If anyone is out of place here, it’s me, overdressed for the weather and holding a smartphone with no signal, wondering how I’ll find my way home again.

More details of the 34th International Naturist Congress at irishnaturism.org