‘The myths we urgently need today arrived perfectly on time 5,000 years ago’

Seanchaí and author Martin Shaw on the power of myths, his five-day-long stories and his plan to bring the snakes back to Ireland 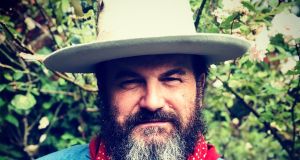 Martin Shaw: “The Pursuit of Diarmuid and Gráinne tells me an awful lot about things that were going on in my life this morning, because it traffics in bone memory, as opposed to skin or flesh memory.”

“The great ancient stories of humanity are trembling bells of association,” says the bard and myth-teller Martin Shaw by phone from his cottage in Devon’s Dartmoor National Park. “They are wild beasts, even when they prowl through courts and castles. They can show us how to behave, can deepen our experience of being alive.”

Shaw is a seanchaí and author who has composed courses on myth and folklore for Stanford University, and is the director of the West Country School of Myth, which he describes as “a type of hedge school, where people come seeking a deeper connection with the world”. The school developed from a four-year period he spent roaming the west country of England, seeking pockets of surviving wildness while camping out. “I started to teach from my tent, and it grew from there.”

Fifteen years later, Shaw now has 60 students who come to him seeking an immersion in the power of myth and to undergo rites of passage in the wilderness. As I speak to him, four students are camped out in the woodlands behind his house, fasting. He’s just been out to check on them before I rang.

“The fourth day is the most pivotal day in the wild, because that’s when insight begins to come,” he says. “An Aboriginal teacher told me that though modern society looks very sophisticated, it’s only three days’ deep. It only takes about three days for the cracks to appear in the clay of the human, before something essential begins to rear its head. Which is why we go out for four days.”

Shaw is currently preparing for his first teaching trip to Ireland – a visit initiated by Kathy Scott of Trailblazery – which he is embarking upon with caution and devotion. The myths and tales of Ireland have played such a profound role in his life, and modern Irish writers like John Moriarty and WB Yeats have been potent lodestars. Though no wilderness fasts are planned, he will be sharing a public chat with Tommy Tiernan in Dublin on October 3rd, as well as a more intimate teaching in Yeats’s former home, Thoor Ballylee, Co Galway.

His intention is to honour the impact that stories from the life of Fionn mac Cumhail and Oisín have had on him, but, “It’s hard to say what themes I’ll be touching on,” he says, “as the deities that I serve don’t let me plan. I’ll turn up as I always do and if the mood is sweet enough I might happen to tell any number of Irish stories. What I’d really like to move into, though, is the juxtaposition between wildness, language and story. If we go there, anything could come out of it.”

But are myths still relevant in the 21st century? “Many of the myths we need most urgently today arrived perfectly on time about 5,000 years ago,” he says. “The Pursuit of Diarmuid and Gráinne tells me an awful lot about things that were going on in my life this morning, because it traffics in bone memory, as opposed to skin or flesh memory.”

While the modern world now regards myths as whimsical tales to soothe children at bedtime, for Shaw they are scalpels by which we can access the subcutaneous aspects of existence. Seeing him perform a story is akin to watching a bible preacher in full throes – whooping and calling and thumping his chest. His portly, densely-bearded appearance suggests a carnival huckster or an interloper from the medieval age – one who revels in sowing seeds of doubt and coaxing us to question the banality of our lives.

“A well-expressed myth can be psychoactive, like a waking dream,” he says. “I think of myth as a wild way of expressing deep truths. The problem I find in myself and others is that we are so hooked into a mode of devouring these days, that we then go out into nature to use it as a fixative, a pretty backdrop, rather than endeavouring to have a real discourse with it. We are clearly in a trance state, and while myth can’t automatically break this, it can help lead us back into connection with the earth – if we allow it.”

Ultimately, what Shaw hopes to accomplish on his trip to Ireland is to help to start to bring the metaphorical snakes back to the island. “A culture falls apart when the snake is not present, so I’m writing a secret book for my trip which I will bestow on people or animals or things that I feel a connection to. Each book will be like a snake that may or may not bite its recipient.”

The only issue causing him concern now is that “a lot of the stories that I tell take me about five days, as there is a whole etiquette required for me to recite them – all sorts of libations and so on. Once you begin you can’t stop, you can’t just tell half the story. We need to allow the story take as long as it takes.”

Better let the babysitter know you could be late home if you are attending one of his events.

Martin Shaw will be appearing at The Trailblazery event in a public interview with Tommy Tiernan on October 3rd: thetrailblazery.com  (sold out)

Live beside the Edge in docklands penthouse for €1.7m
7

It’s time for summery food. Here are four easy dressings that work for every salad
10