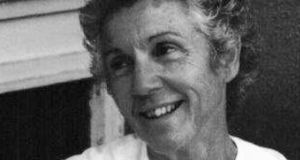 Neasa Ní Annracháin, whose voice many will remember from her poetry readings on Ciarán Mac Mathúna’s Sunday morning radio programme Mo Cheol Thú, and who was a member of the Radio Éireann Players for many years, has died at the age of 92.

Her colleague from the players Peg Monahan described her as being very professional and taking her work very seriously but also remembers her for her kindness and laughter.

She grew up near Skibbereen, the second of six children. Her father, Peadar, ran a small farm, worked as superintendent registrar of births and deaths, edited the Southern Star for a while but would have been best known as a Gaelic League activist. His two-volume autobiographical Mar Mhaireas É recounts his work on behalf of the language and in the national struggle. Her mother, Máire Ní Dheasúna, from Kinsale, ran the home.

Ní Annracháin’s family was Irish-speaking, unusual in the Skibbereen of the time, and she remembered an Irish-speaking priest having to be sent for for her first Confession as her father refused to allow his family to be prepared for first Communion in English. She attended primary school at the Convent of Mercy, Skibbereen and secondary school at Ardscoil Treasa.

When a brother went to Dublin to study to be a teacher, her parents sold the farm and moved to the capital. Higher education was not considered for the girls and Ní Annracháin was taken out of school and sent on a secretarial course.

She then worked as a secretary in the Pigs and Bacon Commission, where her father also worked, and joined the Abbey School of Acting. In 1948, she married, and because of the marriage bar, had to give up her job, but two years later was accepted into the Radio Éireann Players (generally known as the REP).

Hers became a well-known voice on Irish radio and she gave many distinguished performances, in Irish and English, in a wide range of theatrical styles, from Synge and John B Keane to Beckett and Joyce. In 1975, she won a Jacob’s Award for her “outstanding contribution to a distinguished company of actors”. She played Mommo in the radio version of Tom Murphy’s Bailegangaire as late as 1987.

For a long period she read poetry on Mo Cheol Thú, an activity she continued for many years after formally retiring from the REP in 1988.

A few years after her husband died in 1991, she sold the family house and divided the money among her three children, saying she did not want them hanging around waiting for her to die. They remember her as intelligent and energetic, understanding and supportive, loving and kind.

She is survived by her daughters, Doireann and Nuala, and by her son, Éanna.