Sports broadcaster at the heart of RTÉ 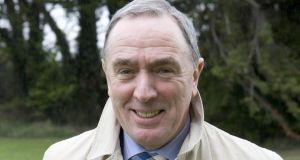 The broadcaster and journalist Colm Murray, who has died aged 61, was at the heart of RTÉ’s sports coverage for almost a quarter of a century. An aficionado of all sports, he had a special affinity with horse racing.

President Michael D Higgins, Taoiseach Enda Kenny, Tánaiste Eamon Gilmore and Fianna Fáil leader Micheál Martin were among those who paid tribute to the broadcaster, who was diagnosed with motor neurone disease (MND) three years ago.

There were also tributes from broadcasting colleagues, as well as leading horse trainers and jockeys. A minute’s silence was observed at Ballybrit on the second day of the Galway races.

RTÉ director general Noel Curran said: “He will rightly be remembered by the horse racing community for his enthusiasm and authority. For all who worked with him in RTÉ he will be remembered as a wonderful colleague and friend.”

Born in 1952, he was one of four children of Michael and Kathleen Murray, Church Street, Moate, Co Westmeath. He attended the Convent of Mercy national school and Oliver Plunkett boys’ national school before going on to the Carmelite College.

The church’s “strong hold on everyday life” was an abiding memory of his early years. “A lot of people’s lives were very much directed towards observance. All the rituals were observed and you were very conscious of that,” he said in 2010.

During the 1960s, however, he became aware of a gradual change “that came with things like Elvis and the Beatles”. The emergence of the teenager phenomenon, together with the desire for personal and sexual freedom found expression in Moate as they did in every other town and city in the country, he recalled.

He took part in several stage productions at the Carmelite College. Once he got into his stride academically, he developed a liking for French, English, Latin and history.

At University College Galway he continued his interest in drama, and graduated with an arts degree in 1972. He completed his HDipEd at NUI Maynooth.

He first taught in Athlone, then Tullamore, before moving to Dublin in 1975 to teach at Ballymun comprehensive school.

In 1978 he answered an advertisement for a continuity announcer at RTÉ, and his application was successful.

Having presented various programmes, including the long-running Hospital Requests, he became a newscaster in 1983. For the next five years he was part of a team that included Don Cockburn, Anne Doyle and Maurice O’Doherty.

In 1988, when RTÉ introduced its hour-long Six One News, he transferred to sports broadcasting as a founder member of the sports news unit.

With his colleague Vere Wynne-Jones he pioneered sports news coverage for RTÉ and remained an integral part of the unit until illness forced him to stand down last year.

In the course of his sports broadcasting career he covered many national and international events, including the Cheltenham festival, since 1990, and the Olympics and Paralympics in Sydney, Athens and Beijing.

He regarded his assignment with Jack Charlton’s Republic of Ireland team at Italia 90 as the highlight of his broadcasting career.

He will forever be associated with horse racing, where his knowledge of the sport, combined with his exuberant personality, made the “sport of kings” accessible to all. From Cheltenham to Punchestown, Gowran Park to Fairyhouse, Murray was the voice and face of racing for hundreds of thousands of fans of the sport.

He also championed coverage of the Paralympics and Special Olympics in Ireland, helping to generate massive interest in both events.

He never tired of his job. He felt privileged to meet sports people of extraordinary talent and ability, and report their exploits to radio and television audiences.

After he was diagnosed with MND he continued to work in the RTÉ newsroom, and embarked on a series of in-depth radio profiles of such luminaries as Sir Alex Ferguson, Johnny Murtagh and Brian O’Driscoll.

He was involved in a trial of the drug Dexpramipexole, along with other patients at Beaumont Hospital, but it was not a success.

In 2000 he was presented with the ESB media award as sports broadcaster of the year. He was honoured by Horse Racing Ireland in 2010 with an industry award for “his engaging and eloquent reports, illuminating the sport in a constantly positive and entertaining manner”.

His efforts on behalf of those with MND were acknowledged with a People of the Year award in 2012.

His sister Cathy, who also worked at RTÉ, died suddenly in May. He is survived by his wife Ann, daughters Patricia and Kate, and sister Mary.

Inspiring style: reboot your home with these fresh interiors ideas
8

Paul Flynn: The hulking carnivore inside me is utterly bored
Real news has value SUBSCRIBE