Self-made multimillionaire who was and remained his own man 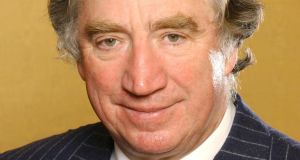 Eddie Haughey, who has died in a helicopter accident in eastern England, was a self-made multimillionaire and entrepreneur who had exceptional drive, vision and ambition. His primary interest was in veterinary medicines and he founded and led the Norbrook Group, based in Newry, Co Down, which specialised in the development, licensing, manufacturing and marketing of pharmaceuticals.

Along with major plants on both sides of the Border, Norbrook also has manufacturing, warehousing and distribution facilities in the US, Australia, New Zealand, the Czech Republic, Kenya and Brazil. Norbrook employs more than 1,700 people in the North and more worldwide.

Haughey was educated by the Christian Brothers and worked in pharmaceuticals in the US for four years in the 1960s before returning to found Norbrook in Newry while still in his mid-20s. In late 2012 he told the Belfast Telegraph : “We were very small and dormant until 1978, until I bought the first factory. It was a struggle. The company picked up a blockbuster of a patent and signed up a major multinational all in one fell swoop.That gave us the muscle to get going. We were very poor up until that one break.”

As he grew prosperous he supported educational initiatives and encouraged the study of science in local schools in the Newry area which he believed were too divorced from industry. He helped fund programmes at the University of Ulster which honoured him with a doctor of science degree in 2008 to mark his contribution to the veterinary pharmaceutical industry .

Research is “very much lacking” in veterinary pharmaceuticals, he told this newspaper in 2007. “We have a lot of very well-educated people, we have great universities doing an excellent job. But we are not giving these people the experience that is needed in this particular industry and we don’t have the facilities to do that.” He spoke of the need to boost research and development and to enhance graduate work experience.

He was well-connected politically both in Ireland and Britain and, over the course of the past 20 years, was closely linked to Fianna F

áil, the Ulster Unionists and the Conservatives.

He was nominated to the Seanad on two occasions by two Fianna Fáil taoisigh – Albert Reynolds in 1994 and Bertie Ahern three years later. His contributions to debates in the Seanad were nationalist in tone, but also deeply pragmatic. He was further appointed to both the Forum for Peace and Reconciliation and the British-Irish Inter-Parliamentary Body. He served as an honorary consul to Northern Ireland from Chile.

In 2004, he was ennobled and took the title of Baron Ballyedmond of Mourne, sitting firstly as an Ulster Unionist and later as a Conservative – a party he backed financially. He was not a born parliamentarian nor was he a serial contributor to debates in either of the upper houses in Dublin or London. His voting record at Westminster shows his opposition to further EU integration and a somewhat mixed approach to issues ranging from climate change, hunting and autonomy for schools.

To outsiders who did not know him well, he seemed a contradictory figure as his political allegiances show. But to those closer to him, he had a developed understanding of power. He appeared both unionist and nationalist, economically and politically conservative but with a commitment to philanthropy.

He had a global vision, as his dramatic business successes illustrate, but he was also rooted in north Louth, south Armagh and south Down where he maintained deep parochial links.

Although fabulously wealthy – he was once named by the Sunday Times as Northern Ireland’s wealthiest man worth some £650 million (€777 million) – he could be unpretentious and gave generously to local causes.

Friends say he financially supported the renovation of his local church and was also understood to have offered a multi-million pound investment to secure the construction of a cross-Border bridge linking Down and Louth at Narrow Water on Carlingford Lough near his restored castle in Rostrevor.

He enjoyed his wealth and was proud of his other properties, Corby castle and estate in Cumbria, and a luxury townhouse in London’s Belgrave Square. He was particularly interested in aviation and had his own helicopter company, Haughey Air. He bought Carlisle airport, and sold it six years later. He also served for a time as a director with Shorts Bombardier Aerospace in Belfast.

A collector of art, he also had a deep appreciation of interior design and is said to have spared little expense.

Generally he did not court publicity and could be deeply cautious in his dealings with journalists. Norbrook’s status as a private company was closely guarded as were its many diverse operations. On the few occasions when the press were invited to his Newry HQ, security was tight and he was known to be particularly concerned by commercial espionage.

He could be litigious and had a strong personal belief in fighting his corner, both in business and especially through the courts. His lawyers were instructed to take on newspapers and planners and he was embroiled in some local issues on his lands.

Some of those who worked under him say he was fair, at times abrasive, and set exacting standards with little accommodation for under-achieving. He was, always, his own man

He is survived by his widow Lady Mary and by his family, two sons and a daughter.