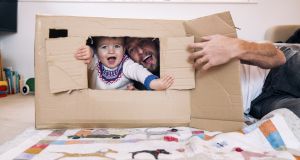 Every morning our local postman parks up his van, delivers the letters, then returns to the van to disseminate boxes in a wild variety of shapes, sizes and colours. He calls to us several times a week and not once has his face betrayed any hint of judgement at our profligacy. Now, that’s an essential worker.

Of course, the boxes themselves are often more exciting than what’s in them. The sight of a new package seems to ignite a small dopamine explosion in the brain, as you briefly consider what tremendous surprise it may contain.

Is it a fold-out television? Roller skates? Piles of cash? Then you remember that you’re a grown-up and your fantasy of getting wild presents from an anonymous donor is far-fetched, and if it actually happened, a prelude to being murdered by a psycho.

The last two packages I got contained a doorbell and linseed oil. Not together, obviously.

All my children have gone through a box phase

Yet there is something about boxes themselves that I find, as the young people say, triggering. But in a good way. A cardboard box is full of potential.

It’s that old cliche about Christmas Day. The kids get some fancy present but end up playing with the box. That was me. I may have invented that. When I was a child, I would beg my father to bring home boxes and rolls of Sellotape from his work, from which I would fashion all sorts of craft and dwellings.

At the end of my bed was a small town. Actually no: it was more like a commune. It was inhabited by two Action Men, a Major Matt Mason (a rubber astronaut Action Man knock-off), a teddy bear and a topless Barbie. (I was six and not very woke.) The five of them lived in a large cardboard house. They all slept in the same room, so God knows what they got up to at night.

The roof accommodated a cardboard helicopter, while much of the house was taken up by a garage, complete with folding door, within which there was a cardboard truck that they would use to go on adventures. (I like to think I anticipated the Paw Patrol truck by some decades. I should sue.). On the back of the truck was a two-person rocket (made from a washing-up bottle) and within the truck all sorts of homemade equipment that fitted everyone except the teddy. Conveniently, the teddy could breathe in space or underwater.

We may worry that childhood has changed since we were children. They get more than we did. Perhaps they are a little less robust. We may worry that we worry about these things. Yet the potential of cardboard, at least in my experience, has been a constant.

All my children have gone through a box phase. Daughter Number Three spent several months with her feet sticking out of a box while she pretended to be a rabbit. (It made sense at the time). And as I’m writing this, Daughter Number Four is sitting in a box that formerly housed a light fitting.

She had me cut windows in it, and inside she’s got a cushion, a toy rabbit and a torch she stole off me. It’s a nice set-up. She likes to shout ding-dong, meaning that I have to open the box and pretend to be surprised to find her there. She’s suggested we post her so she can see her cousins.

Her actual Christmas present is due to arrive this week; and if it happens while she’s in the house, will require all sorts of subterfuge to distract her. Which means giving her sweets. Claiming the house is on fire or that I have chest pains doesn’t get much of a reaction. Santa is bringing her a scooter; which we hope she’ll like. But I’m hoping it comes in a huge box.