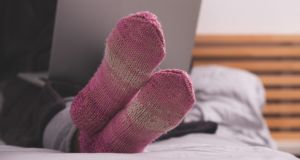 Any news? There’s not much to talk about anymore, now that most of us are stuck at home. Photograph: iStock

Here’s the problem with writing a column: there’s only so much to say. There are a finite number of subjects to write about, and you have to choose one that isn’t already being extensively dissected. Or you have to try to say something mildly original about it while ensuring that what you are saying is something you actually believe.

That’s tricky, because there’s also a finite number of opinions. Everyone has an outer edge, a place where your brain shrugs and says: “I dunno. Don’t care.”

The columnist, however, can never say that: leaving them vulnerable to the temptations of the fabricated viewpoint, of being controversial just to get a few more eyeballs. Some succumb, justifying it as necessary contrarianism. But soon they get locked into a spiral of oppositional behaviour and forget what they actually believe about anything. They become professional cranks. We have had some in Ireland. You can make up your mind who they are. But don’t say it out loud because they’d totally sue you.

The most innocuous comment can lead to a sibling dragging up some long-forgotten (by you) resentment over a pillow fight when you were six. Especially if they’ve been obsessing about it anyway.

You shouldn’t care about any of this, except these dilemmas now afflict many of you non-columnists out there. There is an extreme lack of news.

I know, I know: pick up any newspaper and there’s an abundance of news. There’s nothing but news about, you know, the thing I’m trying not to mention here because it’s everywhere else. And some other news too, if you have the energy to read that far.

Frontline workers have to deal with all sorts of horror, of course, but for the rest of us it’s a deafening quiet from being stuck in our homes. We haven’t met people and had the conversations that usually spark events and opinions. No one has any news.

Or their news is pretty much the same as your news or my news. You haven’t rewatched the Sopranos or developed a six-pack or taught the kids to play the harp. Your roots have grown out and you can’t remember when you changed out of those tracksuit bottoms. Yet there you are on Zoom, and in between the bursts of pornography, you’re desperately trying to think of something new to tell your family or friends. You’re even tempted to make something up.

Now we are all columnists, lapping at the same shrinking pool of material in the hope of providing some small measure of entertainment or emotional succour to those we love.

But if you’re struggling, I have some tips. Jotting down subjects in advance can be handy, though you will need to keep in mind where the conversation will travel to. The most innocuous comment can lead to a sibling dragging up some long-forgotten (by you) resentment over a pillow fight when you were six. Especially if they’ve been obsessing about it anyway. Or you can turn up with nothing in your brain and hope for the best. In life, as in column-writing, this is excruciating. Or you can get up really early in the morning, and try it then. That bit of sleepiness can make it easier to join up thoughts that ostensibly have nothing to do with each other. Though obviously, it will really annoy whoever you’re calling.

I didn’t say my tips would be any good. And it looks like I’ve padded out this column enough to get to the end of the page. So I’m all done. Sorry. Looks like you’re on your own.