Seán Moncrieff: We have made debating all about winning 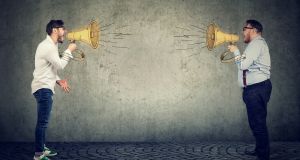 Megaphone debate. We want to be open and civil, but we just can’t manage it.

I know I’ve said it before, but I hate it when pompous I-read-a-book-once types explain what a word means in the original Latin: as if, since the fall of Romulus Augustulus billions of people have been using that word incorrectly.

So here I go: Debate. It has a Latin root and entered English via old French. But what it means now is exactly what it meant then. If anything, it means it now with added conviction. The bate part of debate is, etymologically speaking, a first-cousin of the word batter. To debate means to beat down.

Yet we seem to prize the word, or at least the idea of it. We hear the phrase “healthy debate” without hearing much debate that is healthy.

Perhaps it’s a depressingly inescapable aspect of human nature, but it seems as if whenever we enter into a debate, our first instinct is to cheat.

The dictionary definition describes a formal event with a set of rules: a fixed topic, time limits for speakers. No veering off the subject. No personal abuse. Yet if you stick two politicians (for instance) in any enclosed space they will adhere to two main strategies:

1. Parrot their rehearsed talking points no matter what question they are asked.

2. Pivot out of trouble. Pivot is a technical-sounding way of changing the subject or engaging in personal abuse. You’ve heard it a million times.

You’ve heard it many times. But you’ve probably also done it many times. Our common understanding of debating, whether in the Dáil or in the pub, is one where we don’t set out to learn anything; we set out to win. We start from the position that our “opponent” is wrong, thus making debate – at least public debate – little more than a spectator sport. It’s like people who watch Formula One and won’t admit they are hoping for a big crash. We watch political debate and hope someone will be humiliated. What the debate is about is close to irrelevant.

But there was a time when such exchanges were perhaps a bit more open-hearted. The modern spectacle is roughly based on the dialogues staged by ancient Greek philosophers: where the intention was to interrogate an idea, not a person. Both the interlocutors were there to learn rather than win.

Not that this lasted too long. Socrates, (the philosopher, not the footballer) asked the question Why? a few too many times and they put him to death for it. Anyway, in the modern era, the notion of a civil discussion where both sides are prepared to change their minds if they hear a better argument is fantastical. Political divisions are too entrenched, too mired in bad faith and distrust and mutual demonisation. A politician who changes their mind is seen as weak and somehow suspect.

Perhaps it’s the ultimate triumph of the worse angels of our nature. We want to be open and civil, but we just can’t manage it.

Yet there is a form of dialogue that still adheres to that higher purpose, that most of us practise. The debates we have with ourselves.

It’s usually the small things. Should I buy towels? Should we go to McDonald’s rather than make dinner? Do I look stupid in a hat? We ask ourselves these questions to find the best answer, to sift the evidence and to be prepared to change our minds. Is this hopeful? I don’t know. I’m still fighting with myself about it.