Seán Moncrieff: TV transports us back to less anxious days 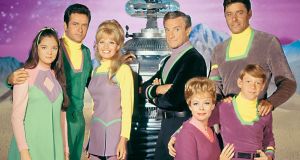 In the 1960s, there was much fretting that Lost in Space and all the other television programmes would rot the brains of young people

The other day Daughter No 4 and I watched Lost in Space. Not the film or the Netflix reboot, but the original 1960s version. She called it Daddy’s Film, the reason being that I had recorded a number of episodes: when I was a little boy, it was my favourite TV show.

In case you’re unfamiliar with it, it was a science-fiction update of the Swiss Family Robinson, where the Robinson family, due to settle on a new world, get thrown off course and have myriad adventures. It came from the stable of Irwin Allen, who during the 1960s and 1970s churned out similar shows, like The Time Tunnel and Land of the Giants.

Daughter No 4, like me so many years ago, was drawn to the characters of nine-year-old Will Robinson, the robot and the nefarious Dr Smith, who sparks most of their adventures due to his greed and cowardice. Bafflingly, the Robinsons always managed to forgive him. But what she and the child-me didn’t realise was how astoundingly camp it was and how, even for the time, the special effects were risible. In one of the episodes we watched, the baddie was a man dressed as a carrot.

Nonetheless, there was a strong sense of synchronicity in the two of us being able to cuddle up together and take delight in the same show. I was Daddy, but I was also a little boy again, not much older than Daughter No 4.

For all the circumstances I don’t need to describe, we’ve probably been watching far more television than usual. I have, anyway.

In the 1960s, there was much fretting that Lost in Space and all the other television programmes would rot the brains of young people. That didn’t seem to happen. Instead, it signposted the lives of that generation and generations afterwards.

Of course, there are books and pieces of music that can bring you back to a particular time and place, but television has always done that too and still does. Long before it arrived on RTÉ, the newspapers were reporting on how Roots was a colossal television event, watched by 85 per cent of American homes when it aired on ABC. I can remember watching it with my parents, and it was the first time I had any concept of racism and the generational damage of slavery in the US. It may have been the first time for my parents, too. In a musty basement flat in Dublin, my friends and I would watch Hill Street Blues on a barely working TV. During the subsequent decades, every now and again, one of us will still say: “Let’s be careful out there.” I was in my 20s watching Thirtysomething. In my 30s, when kids first arrived, we all watched The Simpsons. We still do.

I could go on listing TV programmes: the few examples I’ve mentioned are before the rise of HBO and streaming services and what is now, apparently, the golden age. Every now and again a show comes along and makes a dent in your consciousness: because of the show itself, or what was happening in your life when you watched it, or a combination of both. Which may be why so many of us have comfort shows. It doesn’t matter if you’ve seen it a zillion times before; it’s the feelings it evokes that are important. Friends is an obvious example, both for people who remember it and younger people who perhaps envy the relative simplicity of life it seems to depict.

The comfort is often tinged with sadness too: a nostalgia for a world that doesn’t exist any more, or perhaps never did. Herself’s comfort show is The West Wing: where you have an honest, intelligent president, earnest aides and the possibility that political divides can be bridged. Nowadays, that’s as ludicrous as a man dressed as a carrot.

Why you still can’t have a European holiday this summer. Or can you?
3

How an exercise programme facilitated the spread of coronavirus
4

Born in lockdown: The babies of the Covid-19 pandemic
9