Seán Moncrieff: The world is full of Holden Caulfields

Truth can be a complex, slippery thing, and the lack of it can cause us to lash out 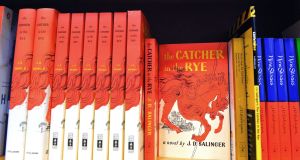 Copies of The Catcher in the Rye by JD Salinger. Photograph: Mandel Ngan/AFP/Getty Images

This year is the centenary of the birth of JD Salinger, who, if you don’t know, is famous for just one book. The Catcher in the Rye is still lauded as the ultimate (and arguably the first) depiction of modern teenage angst. When it was published in book form in 1951, there were some negative reviews – mostly due to its “immoral” content and the use of teenage slang – but enough raves to make it a hit. It spent 30 weeks on the New York Times bestseller list and was reprinted eight times within the first two months of its publication. And like most successful novels of the time, it was banned in many parts of the US. It still sells about 250,000 copies a year.

A not-so-fun fact about Catcher has been its association with murder. John Hinkley jnr, who tried to assassinate Ronald Reagan, had a copy of the book in his hotel room. Mark David Chapman, who killed John Lennon, wanted to change his name to Holden Caulfield and read a passage from the book during his trial. I’m not suggesting that Catcher transformed already disturbed young men into potential killers, but the book does poke at an idea that bothered people then, still does today and perhaps always has: behind all the vestiges of normality, just beyond our view, there is something terribly wrong with the world.

Catcher in the Rye is not the only creative endeavour to exploit this fear. The Matrix films revealed our world as a computer simulation and people as the fleshy batteries powering it: a notion that has received serious academic attention. For millennia, philosophy has struggled with the possibility that nothing might be as it appears to us. Or that there is no us. There’s just you, dreaming it all up.

Truth can be a complex, slippery thing, and the lack of it makes us feel powerless, can cause us to lash out. On social media this happens all the time by “othering” people who present a version of the world that we don’t like: they are stupid, corrupt or dishonest. Holden Caulfield feared the adult world he encountered, so he dismissed it, and the people in it, as fake.

The extreme edge of this reaction comes in the form of the conspiracy theory, which is not a new phenomenon. The phrase “Nero fiddled while Rome burned” has its’ roots in the great fire of Rome of AD 64. Nero was out of town at the time, and even though he instituted relief efforts for the newly homeless of the city, many blamed him for setting the fire in the first place. Nero, in turn, created his own conspiracy theory that the Christians did it. (No one knows why the phrase evolved to Nero fiddling. The fiddle didn’t exist then.)

As destructive as they can be, conspiracy theories are just another way to make sense of a baffling world; an attempt to counter powerlessness with some defining theory, even if it replaces ignorance with paranoia. In Europe, all manner of disasters were blamed upon Jewish plots. Europe wants to trap Britain into remaining in the EU. Mexican drug gangs are rampaging across the American border. Muslims plan to destroy western culture. Take your pick. In a vacuum of ignorance, something always rushes in to fill it up.