Seán Moncrieff: The one big lesson celebrities have taught us during Covid-19 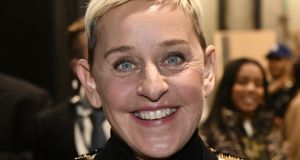 Ellen DeGeneres joked that being stuck at home was like being in prison. Except that her house cost $24 million. Photograph: Frazer Harrison/Getty for The Recording Academy

What do you remember most about the last couple of months? Was there a single, crystallising event that summed it all up for you?

Me neither. It was a long, dreary, lonely, hungover trudge towards a finishing line that none of us could see; that we still can’t see.

Nonetheless, there were numerous attempts to create that Hollywoodesque moment. We clapped. We dressed up. We put lights in windows. Many of them were genuinely moving, but somehow transitory. When each one was over, we went back inside our homes and unpaused the Netflix show we had been watching.

Of course, celebrities fell over themselves to provide the emotional resonance. There was the execrable rendition of John Lennon’s Imagine from various toneless actors and the One World concert, where musicians competed to deliver the super-moving warbling pandemic power ballad. Madonna played dress-up. Patrick Stewart read Shakespeare.

Others tried to be helpful by delivering practical information that wasn’t always that practical. A study by the Reuters Institute found that celebrities were key distributors of misinformation about Covid-19. Some of it may have been a genuine mistake; some of it was nutbag 5G conspiracy theory stuff.

But in nearly all cases, the celebrities attempted to push the idea that we are in this together/the virus doesn’t care how rich you are/I’m going mad stuck in my house too. Yet in nearly all cases, the visual evidence indicated otherwise. Ellen DeGeneres joked that being stuck at home was like being in prison. Except that her house cost $24 million. Others posed by the pool or in their park-sized gardens.

I would have preferred if, rather than attempting to be inspirational or singing, they had picked up the camera and shown me around. I want to see Will Ferrell’s kitchen, Jennifer Lopez’s sitting room or Robert De Niro’s favourite toilet. I bet he has one.

The repeated attempts – and failures – by celebrities to place themselves at the centre of the drama prompted all sorts of dire predictions. The New York Times predicted that celebrity culture is burning; the Guardian claimed Coronavirus has exposed how irrelevant celebrities have become.

Which might be a bit previous. Because it’s arguable that celebrities have been useful during the pandemic. Just not in the way they intended.

The public doesn’t want famous people to be like them. They want celebrities to be different, to be spoiled and cut off from the drab realities of life. And this time, the superstars delivered. They told people stuck in three-bed semis with a tiny garden (if they were lucky) that being stuck in a multi-million-dollar mansion with a swimming pool was equally constrained; millionaires told people laid off from their jobs, with dwindling amounts of cash, to stay at home and not work. They declared that the virus made everyone equal.

But it didn’t: the poor, the vulnerable and the elderly were always more exposed.

The great service that celebrities have performed is to illuminate a truth that has always been there. Our societies are grossly unequal. The people who work in shops, who continue to risk their health so the rest of us can eat, are paid the least. The nurses and care-home workers who have battled the pandemic can’t afford childcare. Having our bins emptied is an essential service. Having another superhero movie to watch is not.

When this is all over and we become bored by things other than the threat of our own death, people will search again for Kardashian-type distraction.

But when that time comes, will we remember what the celebrities have taught us? That you can, if you really want to, have a single-tier health service. That we can be a society, not an economy. That how much money you have doesn’t just determine the number of bedrooms in your home. It can also be the difference between life and death.