Seán Moncrieff: The insanity of shoe shopping with a toddler

Childhood is a time of absorbing new things, but of losing them too 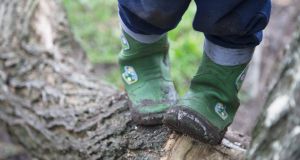 As you know, kids are weird. Daughter Number Four, having amassed 2½ years of life experience, has concluded that change is bad.

New foods, new books, new TV shows all seem exciting to her in theory, yet the reality seems to provoke a kind of panic. Yes, Captain Underpants (or “Pants” as she calls it) has more fart jokes than Toy Story (“WoodyBuzz”), but she finds it difficult to switch; as if liking one is a betrayal of the other. Rather like Marcel Proust, she finds it difficult to escape the bonds of the past.

As responsible adults we have managed to move her on to new experiences through the use of proven parental techniques: coaxing, begging, hiding things and bare-faced lies. But even these tools are rendered blunt when it comes to shoes.

The first time we got them, it wasn’t so bad. They were practical. But once she’d grown out of that pair we returned to the shop giddy at the prospect of what she might opt for this time. She seemed to like the ones with lights in the heel and the ones covered with dancing bears, yet in 30 seconds she managed to duck out of our sight and return with the exact type of boots she had worn on the way in. To our shame, we relented.

On the third occasion, we hoped against hope that the boots had been discontinued. We even did a quick reconnaissance and couldn’t see them. We wowed her with glitter, with bright colours, even a hideous WoodyBuzz pair. Yet somehow she managed to dart off again and return with a new pair of the same boots.

Something is going on here. We suspect she may have some sort of side deal going on with the shop, where they hide them for months on end, only to pop them on display just as we enter.

In the end we distracted her, bought a pair with prancing unicorns and scurried away. This didn’t solve the problem, of course: just deferred the screaming until we got home.

For Big People, such issues are trivial, yet for Daughter Number Four it is her attempt to hold the line against unceasing change. Every day she learns something new. (Yesterday she told me “I like dancing”.) Yet she knows the Big One is coming. We’ve already started pointing to the toilet and reading books about the joys of sitting on one. She’s evinced little interest, and part of me doesn’t blame her. I have a vague memory of my own terror at sitting up on that massive contraption, and the perilous drop beneath. I had a potty, and happily sat on it for years. It was green.

The day after the shoe shop visit I brought her for a walk, and let her wear her booties. I knew, but she didn’t, that this was the last time she would ever see them, that as soon as she went to bed we’d stash them in a bag along with all the other clothes she’s grown out of. And I felt sad. For her, the booties had a life within them, just like Teddy, Dolly, Dinosaur and Foxy, who accompany her to bed every night. Childhood is a time of absorbing so many new things, but of losing them too.