Seán Moncrieff: ‘The driving licence office is where dreams go to die’

My driving instructor was either a spoofer or a genius 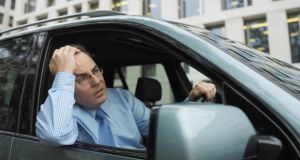 The driving-licence office is a place of wilted dreams. Supplicants arrive, rosy-faced with hope, their arms filled with various documents, only for them to creep out later, slouching from the weight of their failure. They didn’t bring an eye test or their Public Services Card or their proof of address wasn’t proofy enough.

Some try to muster arguments: it doesn’t say anything about a passport on the website. Look at the picture, it’s clearly me. But protestations always meet dead-eyed stares – the sort of compassionate-but-stern expression a doctor adopts as they wait for you accept that you really do have chlamydia.

I was there because I had a British driving licence. I had been meaning to swap it over for an Irish one, but I just never got around to it. I was busy. For 20 years. I learned to drive in London, though the guy who taught me was Irish. He had lived there so long that his accent had become part anglicised. He sounded like someone doing a poor impression of an Eastenders character.

He was either a really good teacher or an utter spoof artist. I was never sure. On the first lesson we hardly drove at all: perhaps 50 yards. Then I listened as he told me what an experienced and brilliant teacher he was and how he knew – just by the way I was sitting – that I was naturally gifted. On that day it felt great. The car could have been on fire and I would have walked away feeling that my driving test was a mere formality.

Yet as time went on, the talks became a large and permanent component of the lessons, and clearly had nothing to do with driving. He seemed to have a compulsive need to talk: about his life in Ireland, and how much he had hated it, about the various jobs he had held down in London, his views on politics and personal motivation. I did seem to be learning to drive too, but I started to wonder if the process would not be speedier with someone less inclined to confession.

But I couldn’t switch to another teacher. I’d become weirdly fond of him. Even when he started to tell me about his three marriages and why the first two had failed; even when he informed me that his third wife said his was the largest penis she had ever seen. And she’s a nurse.

Back in the driving-licence office, I tried to affect the manner of a hero breezily facing a firing squad. I was going to be accepting, but just sarcastic enough to make this woman rethink all her career and life choices. She gloomily surveyed my assembled documents, then softly sighed. She told me that I would have to get a medical.

No mention of a medical on the website either.

“For the lorries,” she said. “If you want to keep driving the lorries, you’ll need to get a medical.”

Confusingly, her tone of voice implied she was trying to be helpful. She pointed at the various letters on my tattered licence that apparently qualified me to drive not just cars, but heavy goods vehicles. I assured her that I was content to retire from a life on the road and she said she’d put a note in my file, just in case I changed my mind.

My instructor had turned up late for our last lesson. I had taken the test three days before, which I had passed. That he had so easily forgotten this made me think at the time that he was a spoofer. Now I’m not so sure. Maybe he was a genius.

‘We treat surgery as kind of icing on the cake’
5

Lockdown letters: ‘Life is all about making connections’
7

Elizabeth Gilbert: When a magical idea comes knocking, you have three options
8

Readers on sibling bullying: My tormentor was there every day . . . waiting
10

‘What can we do to stop our neighbour’s smoke leaking into our home?’
Real news has value SUBSCRIBE