Seán Moncrieff: Poo. You should think more about it

When you’re having your quiet sit-down time today, reflect that you’re lucky to be able to do so 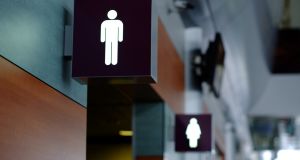 A quarter of the world’s population doesn’t have access to a decent toilet. In Ethiopia the figure is 93 per cent.

It’s an indelicate subject, especially as you may be reading this while munching on your jam-laden croissant, but it is a reality for us all. All things being well, at some point today you will have a poo.

You can relax; this isn’t an excuse for me to embark of a slew of Number Two jokes. Not a slew. Maybe a couple. Three at the most.

For boys, going to the loo can be an event. They can have a favourite toilet, a favourite time of day, a preference in terms of what reading matter they bring with them. Yes, right now, someone is reading this while astride the throne.

Boys, generally speaking, are partial to a bit of scatological humour. Some find this trait annoying. But as a grown man who revels in the occasional fart joke, I find it admirable. It’s healthy and somehow heartwarming to see grown-ups still connecting with their childish selves. And an ability to be occasionally childish does not mean an inability to be an adult. The two can co-exist.

I digress. Poo: we used to be more mindful of such matters. Or at least, it was regarded as the responsibility of local authorities to provide facilities for citizens to do their business while they were out and about doing their business. There used to be far more public toilets.

There used to be an underground one at college green in Dublin.  According to popular lore, locals would direct American tourists towards it, telling them that it was the entrance to the Dublin Metro system.

If that prank persisted into the 1980s (if it ever happened at all), the aghast Americans would have found themselves not just in a toilet, but a particularly disgusting one. The heroin epidemic, plus the costs of keeping them safe and clean, eventually led to an erosion of the public potty stock. If a new one opens anywhere in Ireland now, it makes headlines.

Going to the loo was essentially farmed out to the private sector. There are toilets everywhere, though it’s not quite as simple as that. You also need the intel: which ones are grubby or smelly or customer-only. You need to mindful of your dress and demeanour if you plan to blag your way into a fancy jax in a posh hotel. There are multiple websites dedicated to disseminating this kind of information.

Much as I abhor a cliché, in this instance I am struck by its appropriateness; this is a first world problem; meaning not much of a one. Unless you’re disabled or elderly or suffering from a medical condition that necessitates access to a toilet without being frisked or interrogated and forced to buy a pastry.

And it’s a first world problem in the literal sense too: because in what we used to call the third world, there are still many areas with no toilets or sanitation at all, where there’s no access to soap, or sanitary products for women.

This is the inconvenient truth about the lack of a convenience. A quarter of the world’s population doesn’t have access to a decent toilet. In Ethiopia the figure is 93 per cent.

Sixty-one per cent of the world’s population has to use unsafe sanitation: a situation that kills half a million under-fives a year, and leaves many more millions too sick to go to school. There is a global sanitation crisis, but you don’t hear about it as much about as you should because, well, it’s icky.

When you’re having your quiet sit-down time today, perhaps take a moment to reflect that you’re very lucky to be able to do so.

Lockdown was hard, but it kept us closer to each other than we’ve ever been
4