Seán Moncrieff: Like Brad Pitt, I have a genetic advantage. I’m skinny

I’m asked how much I run or who my yoga teacher is, but the truth is, I’m just lucky 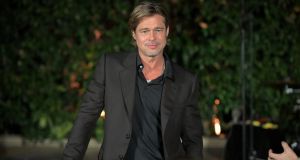 Brad Pitt is 55. One of the many things we have in common is that Brad and I are around the same age, but I know I’ll never look like him with my shirt off, no matter how many reps I do. Photograph: Charley Gallay/Getty Images for Breitling

Brad Pitt and I have so much in common.

In the recent movie Once Upon a Time . . . in Hollywood there’s a scene where Brad gets up on a roof to fix a TV aerial. As anyone in the TV-aerial-fixing business will tell you, such work always requires you to remove your shirt. So, Brad goes full Stanislavski and has his pecs out in jig time. Naturally, he looks super-hot.

The scene is actually a bit of a joke, its gratuitousness (and Brad’s Redfordesque hairstyle) playfully mocking the pin-up image. But for it to work, Brad still had to look good. So presumably he has to prepare for these things.

The internet is stuffed with “Brad Pitt’s Fitness plan” articles, though none of them (that I could find) contain any quotes from Brad. He may diet carefully, concentrate on one muscle group a day and do lots of cardio, whatever that is, or he may not. He might just sit around eating pizza because he looks like that anyway.

We should all be mindful of what we eat and how much we move, but the culture won’t let us be happy with what we have

Here’s the thing: Brad Pitt is 55. One of the many things we have in common is that Brad and I are around the same age, but I know I’ll never look like him with my shirt off, no matter how many reps I do. Whatever they are.

Here’s the other thing: Brad doesn’t seem to live a joyless existence to achieve his looks. He may (or may not) be a vegan, but he enjoys a drink or three. And he smokes. What all those “how to look like Brad Pitt” articles don’t tell you is that the central component are Brad Pitt’s genes. Those genes keep him looking like he’s 30, ensure that his body reacts well to exercise. They may even make him enjoy all that repping and cardioing.

Because not everyone does. Some people can spend months, even years torturing themselves with this stuff and never realise the changes they were looking for. Exercise is apparently supposed to trigger the release of endorphins in the brain, but I suspect that varies wildly for each individual. For some people, it doesn’t happen at all. Like life, nature isn’t fair.

It certainly never happened for me. On the few occasions I flirted with exercise for its own sake, I found it unrelentingly unenjoyable, and didn’t feel any of the benefits that the wellness-industrial complex said I would. In retrospect, I only tried it because of a guilt-tinged sense that it was the sort of thing I should be doing.

But all this may be easy for me to say because, like Brad Pitt, I have a genetic advantage. I’m skinny. I come from a long line of skinny men on my mother’s side. I don’t eat a lot, but that’s because I don’t want to. I avoid driving because I don’t like it so I walk more, and I’m not the sort to spend hours in front of the TV. But that’s hardly an exercise regime. It’s a piece of luck that has kept me thin and, so far, pretty healthy.

The older I get, the more this skinniness looks like fitness. I’m regularly asked how much I run or who my yoga teacher is. And when I reveal the truth, my questioners are, understandably, a bit sickened. Because I did nothing to deserve it.

Interesting use of a word though: deserve.

Of course, we should all be mindful of what we eat and how much we move, but the culture won’t let us be happy with what we have. There’s all this moral-sounding language.

Go to the gym five times a week and you’ll get your just reward. If you’ve taken out an expensive gym membership in the last 10 days and you haven’t used it yet, you may be starting to feel guilty.

Like you’ve done something wrong. But you haven’t. And I’m sure Brad would agree with me.