Laundry and Camus both have a lot to teach us about our weird life cycle. Think about it 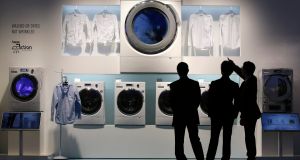 We submit ourselves to the endless, soul-numbing cycle of washing and ironing without much thought. Photograph: Fabrizio Bensch/Reuters

If you just have or are about to put on a wash, you should consider Albert Camus. In between smoking cigarettes and having affairs, Camus spent a lot of his life regarding existence as absurd.

The absurdity stems from the tension between the way things are and the way we want them to be: the “confrontation between human need and the unreasonable silence of the world”.

In other words, the universe is a cold, silent, unintelligent place. There is no God, no plan at work, no meaning. Nonetheless, we spend so much of our time inserting meaning into things and situations that don’t have any. We see patterns when they don’t exist. We say: things happen for a reason, even though they don’t. They just happen. Our desire to believe in something that isn’t there makes us absurd.

If he were alive today, Camus might well allow himself a smug Gallic smirk. Unself-conscious absurdism has run amok in the 21st century. Discrete sets of facts are invested with multiple significances, often contradictory. Brexit is freedom or self-immolation. (Camus was very pro-European unity.) Tens of millions of Covid-19 infections are a pandemic or an exaggeration. Donald Trump is a narcissistic spoofer or he’s a very stable genius.

And in all cases, those providing the significances are, implicitly or explicitly, aligning them with some sort of higher ideal: Justice or Freedom or Almighty God. About 5 per cent of Americans believe Donald Trump was personally selected by God to be president. Including President Trump.

The reign of Donald Trump doesn’t prove that God doesn’t exist. Trump isn’t God’s fault. If there is a God. But it might imply that there isn’t such a thing as objective truth; or if there is, that we haven’t found it yet.

And anyway, the big issues seem far too divisive for there to be any chance of us agreeing that we’re all making it up. A clue to the way things really are may be found in more humdrum activities, particularly one that long pre-dates Camus: doing laundry.

Laundry is the ultimate absurdist pursuit. Every day, in every home in Ireland, bundles of pungent clothes are loaded into machines, along with detergents and various other substances, all of which promise not just to remove stains but to revitalise the materials, to make them smell nice, to make the colours more vivid, to make them better than they were when you first saw them in the shop.

But common sense tells you this is nonsense. Battering the clothes with water and chemicals may make them clean, but also a little more threadbare. In the process of supposedly caring for our clothes we are also hastening their demise. When it’s not pelting rain, we hang them outside, a billowing target for bugs and birds with digestion problems. Then we iron them: an exercise that has no provable benefit to the clothes, but one which we invest with significance. If you go looking for a job interview wearing a crumpled shirt, your prospective employers may well infer that you are feckless and unreliable; that you may have a drink or drugs problem. But all it really tells them was that you didn’t iron your shirt.

Yet we submit ourselves to the endless, soul-numbing cycle of washing and ironing without much thought; just an assumption that it is somehow necessary and important. Camus has written about his childhood memories of his mother’s hands, gnarled from years of wringing out his stinky underpants.

He doesn’t offer much in the way of a happy conclusion to all this, other than it’s best to accept our absurdity; that the meanings we assign come from us, not from any higher power. Being absurd is one thing we all have in common. Of course, young Albert could have offered to help his mother. Mammy Camus would probably have seen some meaning in that.

How can I tell my husband it is over and I want a divorce?
9