Seán Moncrieff: It’s that time of the year when parents commit school fraud

Everyone wants their child to get into the ‘good’ school, even if that means using a false address 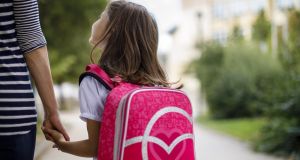 ‘One person I know is considering a conversion to Protestantism to get their kid into the local Church of Ireland school.’ Photograph: iStock

Brace yourself: I’m going to make a dark and shameful admission. And you may conclude that I’m getting everything I deserve.

Quite the few years ago, the time came to get Daughter Number One into national school. There was a school we wanted her to go to – the “good” school – but we didn’t live in the parish. The house was 50 metres outside the boundary.

We had been talking about moving. Talking. Not doing. It would happen. It just hadn’t happened yet. So, we moved. In a theoretical way. I found a house on Daft.ie slap bang in the parish, and told the school that we planned to be living there in the near future. I didn’t explicitly say we had bought it. But I let them infer we had.

Daughter Number One got in and had a very happy time there, as did Daughters Two and Three, who got in under the sibling criteria.

Yeah, like you wouldn’t do it. Or haven’t done it.

There are Department of Education rules. Schools have admission criteria. Everyone tries their best to make the system fair. Yet this kind of thing still goes on all the time. I suspect it’s widespread. I’ve met many parents who have used a relative or friend’s address to get into the right parish. One person I know is considering a conversion to Protestantism to get their kid into the local Church of Ireland school.

In parts of the country where parents theoretically have a choice of what school to send their kids to, real choice is actually diminished: everyone wants their child to get into the good school, even if that school is nowhere near them. As a result, in certain parts of the country, particularly Dublin, the idea of the local school is starting to lose all meaning.

Yet we have no idea if she’ll get in there. If demand exceeds supply, as is likely (it’s a good school), the next criteria is siblings. This isn’t the same place I conned Daughter Number One into, so she won’t get in that way.

And yes, I am aware of the karmic irony. I’m bitching about a problem that I contributed to

Obviously, we’re not the only ones making these kinds of calculations. Parents all around the country are dealing with the same uncertainty. Some have been planning for years.

I’d love to suggest a better system, but I can’t think of one. It feels wrong that Daughter Number Four may not be able to go to the school down the road, yet I don’t blame any other parent for trying to get the best education they can for their child. I’ve done it. On the other hand, this kind of free marketeering doesn’t help the education system. It ensures the good schools get better and the bad schools get worse.

And yes, I am aware of the karmic irony. I’m bitching about a problem that I contributed to.

If she doesn’t get in, it’s not the end of the world. But she will miss out on the old-fashioned simplicity of walking to and from school, of making friends with kids who live down the road and around the corner. Because those bonds, even in childhood – especially in childhood – are what form the foundations of community.

Instead, she’ll spend every rainy school day being driven from one area to another, looking out at cars containing children driving from another area to ours.