Seán Moncrieff: I’ve fallen out of love with America

There’s a darkness I never saw before. Perhaps it was papered over by all that positivity 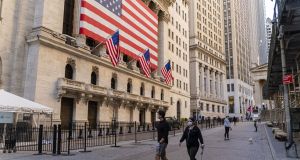 The claim of being the Greatest Country in the World is almost quaint.

If you’re in a taxi travelling from JFK, the sudden appearance of the stacked buildings of Manhattan is always breath-taking. Gets me every time. Then, just as suddenly, you’re immersed in it: the streets, the shops, the music, the restaurants, the writers, the people. From my very first visit, it was always exactly how I expected and wanted it to be.

Sitting in the foyer of Algonquin hotel and eavesdropping on academic-looking people was like being in a Woody Allen movie. In the coffee-shops along the southern edge of Central Park, rich middle-aged women bitched about their gym-instructors and the upkeep of their multi-million-dollar apartments. There’s a hum to the place, the throb of life. A wild, sexy optimism where everyone seems to be delighted to be there

I’ve always been a bit in love with the United States. I’ve visited many other parts, on both coasts and in the middle and encountered nothing but courtesy and a uniquely American vibrancy.

That’s not to say that America’s doesn’t have many failings and self-delusions. The claim of being the Greatest County in the World is almost quaint.

But something has changed now. There’s a darkness I never saw before. Or perhaps it was always there, papered over by all that positivity. The poison has come to the surface.

They are educated to believe that they live in Nirvana

This isn’t about Trump. He’s a mere symptom of a more profound rot. Because the American Dream is, and always has been that: a dream. A mental image of a place that doesn’t exist.

In the richest country in the world, tens of millions live below the poverty line. And about half of them have jobs. Americans work longer hours than most developed nations. They spend more time commuting. There are no federal laws mandating paid leave or parental leave benefit. Yet they are educated to believe that they live in Nirvana. Poor people vote for politicians who favour the rich, believing there’s something in it for them. John Steinbeck wrote that poor America didn’t have any “self-admitted proletarians. Everyone was a temporarily embarrassed capitalist.”

And behind all that is race. In August of 1959, Miles Davis – one of the greatest musicians of the twentieth century – was standing outside the legendary Birdland Jazz Club in New York. A few months before he had recorded Kind of Blue, still the best-selling Jazz album of all time. The day before he had recorded a performance for American Armed Forces overseas. His name was in large letters outside the club.

When a police officer told him to move on, Davis explained that he was working. The cop said he didn’t care. A detective arrived and they beat up Davis and arrested him. It didn’t matter how famous he was, or the contribution he was making to American and world culture, or the good will towards America he was generating because of that. Or that he hadn’t been breaking any laws. He was a black man.

Academics regularly point out that the American founding fathers disapproved of slavery: as if this somehow negates how the US treated and continues to treat a large portion of its own population. Slavery in the south was replaced by a system that was slavery in all but name. Refugees fled north and west, to end up in ghettos. Jim Crow was white supremacy, legally codified. The KKK. Lynching. Dog whistle politics. Gerrymandering. Swathes of laws, local and federal, still effectively discriminate against African Americans in voting, health, education, housing and the legal system.

The complaints of Black Lives Matter are not new and they are not just about police brutality. They are about a country that cannot resolve the unendurable tension between what it thinks it is, and what it actually is; a tension driven by denial and ignorance and fury. It won’t end well.

I can’t say I am still in love with America. I have some fondness, and some pity. But even that is difficult.