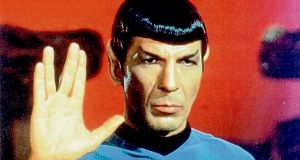 Leonard Nimoy as Spock in Star Trek. Spock is an enigma, ostensibly impassive, but with boiling emotions underneath

And by “people”, I mean boys, mostly.

My retrospective justification is that I much prefer Star Trek. I’ll watch Star Wars, but I’ve always found it to be a bit cartoonish

A lot of “people” may be able to provide detailed reasons why they prefer one over the other, but in truth it’s personal history: you come across Star Wars at just the right time in your youth, and it becomes deeply imprinted. The rest are retrospective justifications. As with political opinions, it’s as much, if not more to do with circumstances rather than reaching sober conclusions after careful thought. Our minds are not as open as we like to think.

My retrospective justification is that I much prefer Star Trek. I’ll watch Star Wars, but I’ve always found it to be a bit cartoonish. The good guys wear white, the bad guys wear black. It’s had a few good plot twists, but the repeated story seems always about the need to blow up something. The dialogue is often risible.

Star Trek has always been more complex. It presents a world (or worlds) in far better shape than ours, yet still there are conflicts to be resolved without always blowing up something. It can present mind-bending physics conundrums, far more depth of character and far more wit. Spock is an enigma, ostensibly impassive, but with boiling emotions underneath. Spock, Jim Kirk and Leonard McCoy could be viewed as the warring elements within one personality: logic, emotion, fear, courage and brutishness.

Characters also develop. In the Netflix iteration, Star Trek: Discovery, the main character, Michael Burnham (a she) is a convicted mutineer in thrall to the rather racist idea that Klingons can’t be anything but warlike because “it’s in their nature”. Later on (spoiler alert), she ends up dating one. Sort of.

But the most striking difference is that Star Trek has always been explicitly political. It depicts a galaxy where it’s not just middle-aged white blokes running things. The original 1960s series was hardly a paragon of wokeness (lots of women in skimpy outfits) but it did feature the first inter-racial kiss on US television. (Fun fact: the pilot for Star Trek had a woman as first officer. But the broadcaster NBC decided the public would not accept such a crazy idea. So Mr Spock got promoted.)

Star Wars has kept the politics vague. There is an empire, that could refer to the Nazis, though it’s never clear what the Empire’s philosophy is, other than a commitment to being evil.

Science fiction has traditionally been seen as an allegorical medium, a way to explore contemporary anxieties from a reasonably safe distance. But the safe distance is gone now

So while Star Trek is generally viewed as the product of a liberal imagination (and generally not liked by conservatives), there are vicious arguments over Star Wars and what, if anything, it’s all about. And into that void, fans pour their interpretations; which in part explains why it’s by far the more popular of the two franchises.

Some argue that the more recent movies display a liberal bent; others claim that having female heroes is #MeToo-ish pandering: Star Wars is simply an adventure story, devoid of any political concerns. Letting women blow up things ruins it.

But arguing that there is no politics is in itself a political argument: and the passion and often vitriol that fuels these debates directly mirrors the passion and vitriol of our political debates here on earth.

Science fiction has traditionally been seen as an allegorical medium, a way to explore contemporary anxieties from a reasonably safe distance. But the safe distance is gone now. Everything gets sucked into the political black hole, making the facile tropes of Star Wars more reflective of the way things are now: each regards the other as the dark side of the force.

Which is a shame. If we embraced a bit more nuance, we could all live long and prosper.

Do you have a Caroline Flack relationship with social media?
6

A Chelsea winner's guide to creating a tranquil garden
9