Seán Moncrieff: I met a friend 40 years on, in strange circumstances

Decades after we played on building sites, I met Frank again. His story was an inspiration 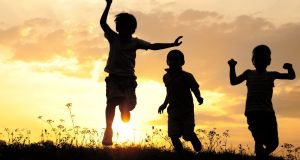 My friends and I played a lot on building sites. As with London, those friends were kids from Irish families who went to the local Catholic school. Photograph: iStock

I was born in London. The usual deal: went to Catholic school and was surrounded by kids whose parents were Italians and Polish but mostly Irish. I grew up feeling Irish; or partly so. In London it seemed as if everyone was English but also something else.

When I was nine we moved to Swindon in Wiltshire, a town that had been earmarked for expansion and where, unlike in London, my parents could afford to buy a house. It was a 1970s-style box on a vast estate called Covingham, which was laid out like a bicycle wheel. In the centre was a park, with dozens of streets as the spokes.

Many of those spokes were still under construction when we arrived, so my friends and I played a lot on building sites. As with London, those friends were from Irish families who went to the local Catholic school. The group could vary in size, but a lot of the time it was Frank and Gavin.

Just three years later my family moved to Ireland. I exchanged a few letters with Gavin and Frank. There was a vague plan to meet up when they were on holidays in Ireland. But it never happened.

Those years probably stick in my mind more than in theirs. Living in Swindon was a novelty for me. And over the decades I would sometimes wonder how their lives panned out.

Then late one night I was watching TV, idly flicking through the channels when I thought I recognised a person being interviewed. It wasn’t so much the physical features that caught my attention but something familiar about the way he held himself; that, and the rounded vowels of his Wiltshire accent. Eventually, a caption came up. It was Frank.

He was being interviewed because life had led him to establish a charity, but in the most appalling circumstances. Some years before, Frank’s sister, stuck in a bad marriage with a controlling man, had attempted to leave. Her husband had murdered her and their son.

She had had a strong sense that this might happen. She and Frank had gone to the police about it on several occasions. The police hadn’t taken it seriously.

With no expertise in this area, and armed with nothing but persistence, Frank set up a charity that works with families that have experienced domestic homicide and with police forces in producing reviews as to how such cases can be better handled. It took a long time for him to be taken seriously, but at the start of this year he was awarded an MBE.

40 years after we used to play on building sites, I got to meet Frank again. He was in Dublin speaking at a conference, and in advance of that I had him on my radio show. And in the short time we had to catch up, he told me that this wasn’t the only family tragedy they had had to endure. Before the murder, a brother (who I had also known) had died by suicide.

Yet Frank didn’t seem angry or bitter or depressed. He had managed to harness those emotions in the service of other people, while giving himself permission to continue to live, to smile, to still experience happiness. The boy I had known had grown into a deeply impressive adult. The word “inspirational” has been overused into meaninglessness. Yet here it was, sitting opposite me.

Gavin, he told me, now makes artisan jewellery and is a lovely man. Rather like a worried parent who wants to make sure the kids are settled, I got a surge of relief and happiness from learning this. And it stayed with me for some days afterwards.

I may never meet Gavin or Frank again. But that’s okay, knowing they are okay. It’s all too easy to forget that there is also much good in this world.