In a fit of wild optimism, I booked a restaurant table for July. You have to have hope 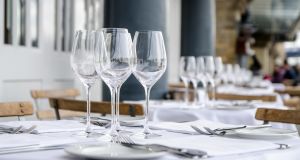 Daughter Number Three and Herself both had birthdays this week, though not so much as you’d notice. There’s nowhere to go yet, apart from DIY shops. But I’m saving that for my Big Day.

I ordered presents, which of course never arrived. According to the parcel tracker thingy, they were, and still are, “in transit”; like that’s a place rather than limbo for parcels. We know that feeling. We’re all in transit.

With no swag to hand out, it’s difficult to make it special. We’ve eaten everything on the takeaway menu. We’re sick of drinking at home. Sick of playing games, too tired to make a special dinner: not the meal preparation so much. It’s the two-hour queue to get into Tesco. On top of all that, Herself and I are in mourning for our recently-finished lockdown binge show (The Americans on Amazon Prime. It was excellent).

This stage in the lockdown might be the one that reveals who we really are. As our patience is tested, we are being boiled down to our basest desires: what we want the most is revealed to us. Family, hugs, the sight of the sea, the smell of cut grass. The two crappy birthdays sparked a selfish want in me. I miss restaurants.

Hardly an essential service, I know. But perhaps that’s the point; the wild luxury of getting to indulge in some frippery that has no place in our world now.

It wouldn’t have to be a particularly fancy. Even before, I didn’t always enjoy that sort of thing. Some of your Michelin-starred places are so delighted with themselves, there’s a vague sense that they are doing you a favour by freeing you from large amounts of cash in return for a series of tiny meals. It’s like going to the home of a person who claims they are very welcoming and love having people over, but when you get there the plastic cover is still on the sofa. I’ve entered such places and had the odd urge to whisper in the ear of the maître d – who has probably been one for decades: you do know that you’re doing this wrong?

Never have, of course. Too scared.

All this is moot now. Now I’m reduced to conjuring a fantasy restaurant. One with low lights and white tablecloths and the gentle tinkle of cutlery and glasses, where the food and wine are excellent of course, but the person who greets you at the door is relaxed and down to earth. You can imagine meeting them in the queue for Tesco.

You don’t want the tables too close together – so that others can’t eavesdrop on your conversation. But you don’t want then them too far apart either, so you can have a chance of listening to theirs. Here’s the truth, kids: when couples go out to dinner, they scan the room to see if any of the other couples are arguing or possibly having an affair, who is over-dressed or under-dressed, who is so drunk they might be unable to stand up. Don’t tweet me to say you never do that. You’re a liar.

Then there’s the food competition. Ordering is a nervous process for Herself, as she tends to change her mind several times over what to get. If she gets it wrong, then she’s filled with yearning for what might have been. I’m simple. I go total carnivore. I like to ask: did you shoot it yourself?

For each course, we rate who made the better choice. Sometimes we swap, or share. But it doesn’t really matter who wins (even though it’s usually me). It’s a gentle competition. There’s wine.

In a fit of wild optimism, I did book a restaurant table for July via a website. The place might be open. I haven’t received a cancellation email. Not yet anyway. You’ve got to have hope.