Seán Moncrieff: I have a profound love of bread – the smell, the taste, the texture

For all its emotional and symbolic charge, we don’t seem to value bread 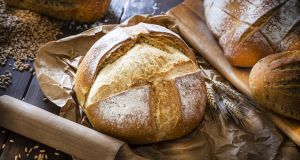 The daily purchase of fresh bread isn’t an option for most of us anymore. Photograph: iStock

I’m not sure if I remember this, or if I was told about it: every morning, my mother, my sister and I would bring my sister to school. I was three or four; certainly young enough to still be in a pushchair. On the way back my mother, who had her oddities, would suggest tea and toast and then intone the same piece of doggerel: tea and toast and turkey roast and whiskey, wine and gin.

I had no idea what this meant, and still don’t; other than it is an unusual combination and probably inappropriate for a child. I’d always assumed it was some well-known verse, but a cursory google only turned up recipe websites.

The toast was made from white crusty bread, and as we didn’t have one of those new-fangled toasters, placed under the grill. My mother, who was an atrocious cook, invariably burned it. But I didn’t mind. I’m still partial to slightly burned toast, and I have a profound love of bread.

Come the zombie apocalypse, the lack of bread will be the most difficult thing for me to cope with. I may become open to all sorts of depravity in return for a few slices. I love the smell, the taste and the texture. It’s comforting and homely but can also be adventurous. Bring me to a swanky restaurant and I tend to judge the whole experience on the basket of fancy breads they bring out first. If the restaurant doesn’t produce bread – or charges for it – that establishment is dead to me.

Fancy bread for dinner is different to fancy bread for breakfast. For the former, it’s limited only by imagination. For the latter, it’s always, always sourdough. I love sourdough, but it’s amusing that the food industry has fetishised a version of bread that is thousands of years old; that long pre-dates your bog-standard loaf. Sourdough bread is just bread.

What largely replaced it in many countries was a form of bread made with a different sort of yeast – and it became the preferred option because it was easier and quicker to produce. But it was, and still is, delicious: walk past most street corners in France and let the aromas seduce you. Flour, water, yeast and salt. Yum.

But the really big change in bread took place not long before those morning walks with my mother: the industrialisation of baking. It even has a name. The Chorleywood Bread Process was the result of a number of food scientists trying to figure out how to mass-produce bread that wouldn’t be rock hard after 24 hours. The secret ingredient was enzymes, which make your average sliced pan lighter and longer lasting. And because enzymes are “process aids”, they don’t have to be included on the list of ingredients.

Most of your sliced pans are made this way, or a variant of it. The result is a form of bread that is uniformly bland and, in many cases, tastes like cardboard.

There are still a few bakeries around – some of them within supermarkets – but they are increasingly rare in Ireland. For all its emotional and symbolic charge, we don’t seem to value bread. Or we don’t have the time or money to consider it. The daily purchase of fresh bread isn’t an option for most of us anymore. Modern life is so full that all we can do is drive through our emptying town centres, and out to the hypermarket to buy food that will last until the following weekend: one of the many ways in which we are forced to sacrifice quality for the mirage of convenience.

And yes, I have a bread-maker. One of these days I’m going to take it out of the shed.

Expert tips: A psychotherapist on how to look after your relationships
9