Seán Moncrieff: Dublin is lovely. Why can’t we say that?

The bad things about Dublin are true. As are the good things. It’s the essence of city life 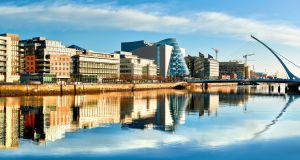 The most familiar is often what you don’t see.

On working days, I usually walk down South William or Clarendon Street. At this time of the year especially, every bar, restaurant and coffee shop decant their customers onto the pavement. Tourists. Mothers with pushchairs. Hipsters. Lads holding pints.

Young people sit on the steps of the Powerscourt Town House Centre and attempt to look cool by not attempting to look cool. Music leaks from shops. Buskers (now thankfully regulated) bang out competent covers of U2 songs. Sudden bursts of laughter echo around the streets, disconnected from whatever caused them.

When it’s sunny – even when it’s not – the temptation to sit down and order a glass of something is almost overwhelming. But I’ve stuff to do. I swing into St Andrew’s Street, where the inevitable tour guide is telling a group about the Molly Malone statue while making the inevitable boob joke. (“You might notice her rather large . . . eyes”).

Then I enter the freneticism of Dame Street, with tourists and commuters waiting for various buses. The Luas swishes past the gates of Trinity College, with its leafy square and a breathtaking library straight out of Harry Potter.

I often barely notice any of what I’ve just described. Only when there’s somebody with me do I pay more attention; to how pleasant this is, of how lucky I am to work in town.

Brace yourself. I’m going to use the words “Dublin” and “beautiful” in the same sentence. Because it is. Dublin is beautiful.

Many countries have an ambivalent relationship with their capitals. Invariably, there’s some sort of rural/urban divide, there’s beef over how much economic and political power is shared between the capital and everyone else.

There’s a perception that the urbanites are looking down their cosmetically enhanced noses at their culchie cousins. And this is true for Dublin as much as anywhere else. Possibly even more so.

Yet my impression is that, elsewhere, these kinds of problems don’t preclude an appreciation of the place itself. French people from the south might feel that Paris is rather snooty, but they’d still accept that it’s a fabulous city.

Rural Americans might find New Yorkers incorrigibly rude, but that won’t stop them visiting. I can still remember my first time in New York when a woman in a queue was casually but brilliantly ignorant to me. I was thrilled. That’s what you go to New York for. (And yes, I know New York isn’t a capital).

But when it comes to Dublin, I find a reluctance from non-Dubliners to say anything good about it. Perhaps it’s because of the reportage. Gangland shootings. People begging on the streets. Sky-high rents. Sky-high pint prices. Daughter Number One works in Temple Bar and says it’s “the dirtiest place on earth”.

In Dublin, you have to be situationally aware, parts of it are dodgy

But perhaps also it’s because we are local by instinct. People who have lived in Dublin for most of their lives will still tell you they’re from Kerry: as if it’s some form of betrayal to admit that they like Dublin too; that Dublin is actually their home.

The bad things about Dublin are true. As are the good things. That’s the essence of city life. It’s contradictory. By international standards, Dublin city centre is small and walkable, so you will see poverty and extravagance metres away from each other.

In Dublin, you have to be situationally aware, parts of it are dodgy. Yet Dubliners are extremely friendly and routinely show great kindness. On my walk to and from work, I witness this all the time.

Last year, almost nine million tourists visited Dublin, and while there’s bound to be a few who didn’t like it, the fact that that figure routinely moves upwards would indicate that most of them did. That alone should be a reason for us to be proud of our capital. Because it does – or at least it should – belong to all of us.

Period homes in a tech neighbourhood: two to rescue on Pearse Square from €600k
Real news has value SUBSCRIBE