There are things you can do as a dad. You can encourage your daughters to tell you about it 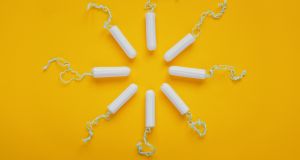 After she left school and got the good job in the bank, my sister would come home every weekend, usually in possession of a cake. The cake would be inside her weekend bag, which she would flip open on the kitchen table. On one such Friday, she extracted the cake and left her bag open.

“Sean will see your cigarettes.”

In retrospect, my sister was being mischievously obtuse. I, on the other hand, was 16 and actually obtuse.

“I can’t see any cigarettes,” I said.

My mother, irretrievably committed to her codeword, was doomed to repeat herself.

This may be an imagined memory, but I can still see her head go down and sense her multiple disappointments: at her failure to protect me from a reality of female life; at a daughter who would be so brazen about her tampons; at a son who would even know the word Tampax; at a world not prepared to cover up the shame of menstruation.

I’ve spent all of my life living with menstruating women; most of whom, luckily, have not been quiet about it

Times have changed since then. But not that much.

There’s still a lot of squeamishness, an urge to be secretive – from women and men – over something that happens to billions of women on this planet every 28 days or so. As you know, a recent TV advert for Tampax was banned here (and caused much Daily Mail fuming in the UK) because of the use of the phrase “get them up there, girls”.

I’ve spent all of my life living with menstruating women; most of whom, luckily, have not been quiet about it. When Daughter Number One’s first period arrived, she was so delighted we high-fived. Now her and Daughter Number Three’s cycles coincide. One day a month I’ll come home and they’ll both be in bed.

There’s been a few whoopsies. There was an unfortunate experiment with a menstrual cup that disappeared. The nurse said it happens quite a lot. And a few initial accidents with tampons. Fun fact, boys: if a tampon isn’t inserted correctly, it can fall out. This also happens quite a lot. “Get them up there girls” wasn’t included in that advert for the sake of it. It was an important instruction.

Obviously, I’m writing about something I have no direct experience of, but what I do know is the monthly period experience can vary from mildly inconvenient to writhing-on-the-floor painful. A societal norm where women are required to suffer in silence seems to amplify a cruelty nature has already handed out to them.

But to mention periods in polite company invariably provokes discomfort; an ick response – rather than the realisation that women put up with this crap every month. Women are extraordinary.

Some may argue that it isn’t about that at all. Just about taste and decency. Mentioning your period is in the same category as declaring that you’ve just had a vigorous bowel movement. There are things we don’t need to know about each other.

But going to the toilet, for most people, isn’t a defining experience. Menstruation is. Yet in the 21st century, surveys and studies repeatedly find young women particularly still feel shame about it: they cannot escape the millennia-old superstition that it is somehow dirty. And what’s also striking is how so many young women feel they can’t talk to their fathers about it. Obviously, mothers will have more direct experience, but treating it as a secret “woman’s problem” only perpetuates the idea that a period is something that should only be whispered about.

There are things you can do as a dad. You can encourage your daughters to tell you about it. You can ask how they are feeling. You can learn about pads, applicators and tampons and you can go to the shop and buy them. And you can thank whatever deity you follow that you are a man, and that this doesn’t happen to you.

A Dublin househunt: I found ‘the one’, then the survey results came in
Real news has value SUBSCRIBE