Seán Moncrieff: Can we rediscover the wonder we had as children?

The older we get, the more locked inside ourselves we become 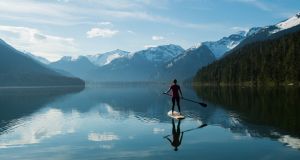 ‘There are all sorts of “experts” who will tell you how to get the Wonder back. Climb a mountain. Jump in a lake. See through the eyes of others. Hug a lama.’

If you have ever provided support services to a teenager or “young adult” (eye roll), you’ll be aware that they know it all. At the very least, they know more than you, and feel encumbered to inform you of this as often as possible. How you managed to survive into your crinkly years while drowning in such profound ignorance is something they never seem to consider.

It can be a bit annoying, but it’s all perfectly natural. It’s part of growing up. And while there may be aspects to modern life that teenagers are more versed in, the main ingredient, for them, is novelty. It’s all brand new. Every generation thinks it is unique. Every generation experiences the world as if they are the first to do so. They are not (quite) children anymore, but they still retain a sense of wonder. Everything they smell, see, taste, touch, think and feel is fabulous and close to overwhelming; hence all the noise they tend to make.

A million years ago, their parents were like that too.

But over time, it fades. Familiarity renders things invisible. The humdrum slowly extinguishes the magic, and everyday becomes a reminder that the world is complicated and contingent; that there are precious few black and white situations.

Over time, you realise that whatever small amount of wisdom there is to be gleaned from the world isn’t based on what you know; rather, an awareness of what you don’t know. Every candle you light in the cave only reveals how much bigger the cave is.

This kind of studied ignorance is one of the major themes of philosophy. Socrates made a career out of it in ancient Athens, declaring that he didn’t know anything and interrogating others about how they knew what they thought they knew: which must have been really annoying as well. That’s probably why they put him to death.

Yet if it was possible to nip back for the weekend to our youthful selves – to confirm that youth is indeed wasted on the young – I’m not sure if it would be that enjoyable. Yes, there would be the flat bellies and the hair, the smooth skin and all that energy, but we’d still be the same people, knowing how much we don’t know, still slightly worn out by the lives we’ve lived. The wonder would still be gone.

There are, as there always are, all sorts of “experts” who will tell you how to get the wonder back. Climb a mountain. Jump in a lake. See through the eyes of others. Hug a lama. Some of these things might be fun, but they are all predicated on the idea of doing what you normally wouldn’t; on pretending not to be you for a while in the hope that this will provoke some sort of profound change. But you’ll know, from your accumulated ignorance, that profound change is all but impossible. The older we get, the more locked inside ourselves we become.

There are also lots of people – Twitter is filled of them – who will excitedly tell you that they experienced transformation by getting in touch with their inner blah blah. As often as not, they are trying to convert you to some religious or “spiritual” or knit-your-own-angel ideology. Or sell you something. Or both. Or convince you so they can convince themselves and stay one step ahead of that nervous breakdown.

Finding wonder in the everyday; that’s the trick. Not the Patrick Kavanagh-sitting-half-cut-on-a-bench stuff, but the really boring; the soul-killing. It can still happen, sometimes. When you’re on the bus. Or putting out the bins. Or ironing, while listening to Miles Davis. I’ve already figured it out for one of those things. When I’ve cracked the others, I’ll get back to you.