Seán Moncrieff: Blokes like me have to err on the side of caution

Why? Because of the way men have treated women for millenniums 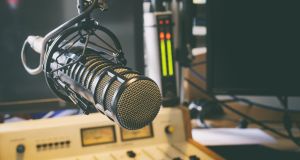 I didn’t want her to leave the studio with the vague impression that I was some Harvey Weinstein type.

Not too long ago, I interviewed a well-known actor. Sometimes on radio shows there can a production-line feel. During the adverts the interviewee comes into the studio, you shake hands, make a bit of chit-chat, then the red light goes on. You do the interview until there’s another ad break. You shake hands, say thanks. They leave. You’ve met in the formal sense, but you still hardly know each other.

This actor was wearing a very nice coat. I noticed it as soon as she came into studio, and it struck me that it was the sort of coat that Herself might like. I had a quick tumble of thoughts: I could ask the actor where she got the coat and buy it for Herself as a surprise present. Or I could ask, look it up online and send the link to Herself. Or I could take a picture of the actor in the coat and send that to Herself, along with the message: do you like this coat?

The actor and I got on fine, as well as you can within the space of five minutes, and she seemed to me to be a grounded and reasonable person; she was as nice as I’d hoped she’d be. I considered asking about the coat when the interview ended. Yet the idea gnawed at me that she could interpret the question the wrong way: that she might think it was some smarmy line, or even slightly pervy. Because men don’t routinely ask women they’ve just met where they get their coats.

At home, Herself said I should have. I was being neurotic. There’s no way she would have misinterpreted the question. And Herself is probably right. Or 70 per cent right. The thing is: Herself knows me and knows how I would have intended the question. Herself knows that I quite enjoy going shopping for clothes with her (within reason). That I’ll give an opinion when asked for one (also, within reason). Conversely, I never bring her, or anyone, clothes shopping for me.

The 30 per cent area of doubt comes from the actor not knowing any of this about me, or me knowing anything about the actor. Asking about the coat could have – as the young people say – triggered her in some unexpected direction.

But even if she had misinterpreted the question, would it have changed anything? Probably not. Other than I’d now know where she got the coat. I’ll probably never meet that actor again. Yet I didn’t want to potentially offend her, or make her feel uncomfortable. I didn’t want her to leave the studio with the vague impression that I was some Harvey Weinstein type. And in the end, that was more important.

No, this isn’t the bit where I go on some rant about political correctness. But obviously there’s a wider context here.

My second-guessing myself is part of the (hopefully) changing dynamic between men and women, where there will be respect and a wee bit of forethought about what we do and say. And this has been informed by the #metoo movement, with women and men speaking out about sexual assault.

But there’s a very long way to go yet before that’s all fixed. There’s a long way to go before we all see each other as people rather than genders or sexualities or skin colours; where we can all assume other people see us that way. So in the meantime, blokes like me will have to err on the side of caution. Not because of political correctness or fear being lynched by social justice warriors. But because of what men have been doing to women for thousands of years.

Anyway, there’s a good chance Herself wouldn’t have liked the coat. These things are tricky to get right.