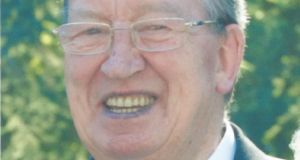 Dr Séamas Ó Buachalla, who has died in his 90th year, was an educationalist who made significant and long-lasting contributions to the formation and development of educational change in Ireland both as an energetic, far-sighted and personally modest reformer in the Department of Education, and also subsequently as an academic in Trinity College Dublin.

Born in Cork city, he was educated first in that city’s Christian Brothers school, in University College, Galway and in Queen’s University, Belfast, where he was awarded successively a BSc and an MSc, before joining the Department of Education in 1962 as a science inspector. His career in the department was marked by his role in the development and introduction of important new syllabi in science and mathematics, including the promotion of biology as a post-primary school subject, and his encouragement and support for the teaching of science in girls’ secondary schools.

He was a member of the advisory board for the department’s revolutionary report on Investment in Education in 1965, and the following year became an adviser to the then minister for education, Donagh O’Malley, as O’Malley was developing his project of free secondary education for all in Ireland, based on that report. The same decade saw his involvement in the launching of educational television and his role as a founding board member of the annual Young Scientist school competition, first established by Aer Lingus, which has been an increasingly important landmark in the Irish educational scene in successive years.

In 1968 he joined the academic staff of Trinity College Dublin, and was responsible for the professional and educational moulding of several generations of students who acquired their teaching qualifications in that college. He was awarded his PhD by Trinity in 1980 and became a Fellow emeritus of that university following his retirement.

During his career as an educationalist he was associated with a number of significant bodies in the development of educational policy at both national and international levels. He has been a consultant to the Council of Europe, Unesco and the European Cultural Foundation of the Council of Europe, in which he made contributions on education and regional development, higher education policy, and education in sparsely populated areas.

In 1977 he became a founding member of the Educate Together movement for the development of multidenominational primary schools, which was first established in Dalkey, Co Dublin. In 1982 he became a member of the National Council for Educational Awards and chairman of its Board of Humanities. As an educational academic, he was also consulted from time to time by no fewer than four different ministers for education from different political parties.

His early interest in the educational theories and practices of Patrick Pearse led to his publication of an edition of the 1916 leader’s writings on education in 1980, which featured a foreword by FSL Lyons, among other works on Pearse in a number of languages. He also took a significant hands-on role in the restoration of Saint Enda’s, Pearse’s school in Rathfarnham, and the establishment of the Pearse museum.

In 1980 he also served as a consultant to the Van Leer/Údarás na Gaeltachta project on Gaeltacht education, and from 1982 became a member of the National Council for Educational Awards. In his seminal work, Education Policy in the 20th Century (1988), which was the first major contemporary study of its kind, he described the Catholic Church as “the greatest proprietorial and managerial presence” in Irish education. It rapidly became a standard work.

An article on trends in Irish higher education policy between 1987 and 1992, published in the European Journal of Education in the latter year, underlined his status as an informed academic commentator, as well as a participant, in the field of Irish higher education. He was also a founding member – and a regular participant until health issues prevented from travelling in more recent years – in the meetings of the Interskola organisation, an international meeting of minds concerned with education in Scandinavia and other sparsely populated areas of Europe.

His love for, and commitment to, the Irish language marked his personal as well his academic life, and was reflected in his supportive role in organisations such as Muintearas, Údarás na Gaeltachta and Gael-Linn. His family and academic interests were combined on country walks with his children in their early years, when he would teach them the names of the flora and fauna they encountered in Irish as well as in Latin and English.

He is survived by his wife, Éilis (nee O’Sullivan), whom he married in 1963, by their two daughters, Niamh Buckley and Sinéad Buckley Quinn, and his granddaughter Rachel Quinn.