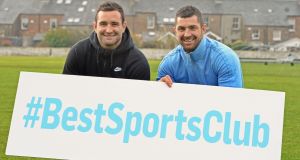 The ‘Irish Times’ Best Sports Club in Ireland competition invites sports clubs of all categories to enter, at www.irishtimes.com/bestsportsclub. Pictured at the launch of the competitoin are National Dairy Council brand ambassadors Dave and Rob Kearney. Photograph: Eric Luke

Terenure College Rugby Football Club leads the field with 41 nominations. It is followed by the Plurabelle Paddlers, a women’s dragon-boat racing club, nominated by 32 people so far. Larry’s Kickboxing Club in Carlow is just behind it, with 31 nominations.

In its hunt for the Best Sports Club in Ireland, The Irish Times invited members of the public to write a short pitch for a club they know and love. Altogether, there have been almost 1,200 nominations from across Ireland.

Terenure College RFC grew out of the school of the same name in Dublin 6. Deirdre Harte, who wrote one of the many nominations for the club, writes: “It is a community based club with wonderful kids, players, coaches and parents. All are involved in every aspect of the club life, from mini rugby to the senior and veterans teams, to fundraising and social events, to setting up a special needs team and a European under-13s festival.”

Plurabelle Paddlers is made up of 60 breast cancer survivors from the Dublin area. This “support group with a difference” undertakes dragon-boat rowing, as exercise to help stave off recurrence of breast cancer. “The club has inspired several other breast cancer survivor dragon boat teams around the country, creating a network of women who are living proof that sport can change lives,” writes nominator Ciara Devine.

Larry’s Kickboxing Club in Carlow town is just three years old. It caters for all ages, men and women. Its members have competed in Ireland, England, Italy and Spain including at the World Kickboxing Unified Championships. “Our club is like one big family,” writes Chloe Brennan. “Everyone is treated equally and we all have great fun. It’s a great sport to keep kids active and healthy, and it’s great for self defence and great discipline for kids. This club has been a great contribution to the community.”

The competition as a whole has produced some interesting statistics. Gaelic football is the most nominated sport, with 44 per cent of all nominations, yet no GAA club features in the top 10 list.

Entries have come from all over the country, with every county bar Fermanagh featuring. Counties Dublin, Cork and Carlow have produced the most nominations.

The winning sports club, to be announced in June, will receive a prize of €5,000, with a further €1,000 for another deserving entrant. The prize is provided by the National Dairy Council, the competition’s sponsor.

While numbers of nominations are significant in bringing a club to the judges’ attention, judges will make their decision based on criteria including community involvement, club spirit and, of course, sporting achievement.

You have until Sunday, May 15th to nominate a club. You don’t have to be a member to nominate, and a club can be nominated more than once.

Entrants are invited to write a short pitch – of no more than 500 words – for any sports club, at irishtimes.com/bestsportsclub. The winning club will be announced next month.

You can view the clubs that have been nominated so far here. Here are the top 10.

8. Killarney Celtic Football for All

The trained GP who can’t work in Ireland, despite the shortage
7

Róisín Ingle: I hated those wearable ‘fitness yokes’. Now I’m one of those people
10