Ross O’Carroll-Kelly: ‘Críost on a rothar. It looks like Chorlie Haughey’

The old man has spent some of his hord (slash, crookedly) earned money on a statue of the late, great Fr Fehily 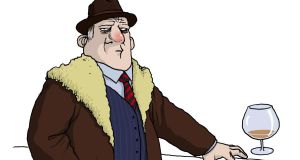 ‘Denis’s religion was rugby!’ the old man goes. ‘Why isn’t he holding one of his beloved Gilberts?’

It’s an incredible feeling. I’m talking about going back, as in driving through those famous black gates with the words, “Castlerock College,” written above them – and then underneath, Pecunia non olet, meaning, “Money has no smell”.

It would not be an exaggeration to say that I’ve got literally goosebumps?

It’s, like, 21 years since Castlerock College won the Leinster Schools Senior Cup and – yeah, no – the old man has spent some of his hord (slash, crookedly) earned money on a statue of the late, great Fr Fehily, which is going to be unveiled today.

McGahy – the current principal – is not a happy rabbit about it either. He’s the dude who banned rugby from the school because of its – and this is an exact quote – “morally deleterious effect on the student body”. Unfortunately for him, the old man persuaded the board of management that it was actually the best idea they’d ever heard – I suspect more of his hord (slash, crookedly) earned money changed hands – and they forced McGahy to actually commission the thing, then clear a space for it.

McGahy is one of those people; when you challenge his authority, he storts quoting his LinkedIn profile

So I throw the cor in the cor pork, then I walk up to the school. I spot the statue next to the main entrance, although it’s covered with a white sheet and there’s, like, a small crowd standing around it – we’re talking 40 or 50 people, pretty much all past pupils.

I spot Christian and JP and I tip over to them. I’m there, “Hey, goys, how the hell are you?” and it ends up being high-fives and bear hugs all round. It’s that kind of day.

And Christian’s there, “Yeah, no, fair focks to your old man.”

I’m like, “Thanks, Dude. Although, I have to admit, I thought there’d be a bigger turn-out.”

McGahy doesn’t waste a single moment. He looks like a man who’d rather be removing his own tonsils than doing this.

“Ladies and gentlemen,” he goes, “thank you for coming here today, a day when we remember the late and – to some of you – lamented former principal of Castlerock College, Fr Denis Fehily. Denis was an interesting man in many ways. His teaching methods were unusual, some would say that they had no place in a modern school educational environment. But the board of management were adamant that he should be honoured in some way. And so it is my duty to unveil this statue to Fr Denis Fehily, a man who will always be . . . my predecessor.”

He whips the sheet off and there ends up being, like, literally gasps? No one even claps.

“Críost on a rothar,” Oisinn goes. “It looks like Chorlie Haughey.”

And then, all of a sudden behind us, someone shouts, “Who in the name of Hades is that supposed to be?”

I turn around and it ends up being my old man.

“You!” he goes, fixing McGahy with a look. “I asked you a question! Who the hell is that?”

“I consulted with the sculptor beforehand, yes.”

“Was he a sculptor who just happened to have a statue of Chorlie Haughey, half-finished, stuck in the corner of his workshop?”

“And what the hell is that in his hand?” the old man goes.

Everyone laughs. I don’t think any of us ever thought of Fehily being especially religious – even though that’s a random thing to say about a priest.

“Denis’s religion was rugby!” the old man goes. “Why isn’t he holding one of his beloved Gilberts?”

The dude’s like, “Certain members of staff felt it might be prudent to, well, play down that part of Fr Fehily’s past.”

“You mean you!” I suddenly shout. “You decided to play down the rugby!”

“Yes,” McGahy goes, “given the shame that rugby brought to this institute of learning, yes, I made that decision.”

I’m like, “Shame?” because he’s obviously talking about us being stripped of our Leinster Schools Senior Cup title for doping. “How literally dare you?”

The old man goes, “Leave this to me, Kicker!” and he walks right up to McGahy so that their noses are no more than six inches aport.

“I don’t recognise the Denis I knew in that statue!” he goes. “And I certainly didn’t recognise him in that ridiculous excuse of a speech you just made! Denis was a great man! Denis was rugby! Denis was his desk calendar quotes about life and his Hitler 45s and the smell of whiskey you caught off him if you happened to walk past his office at 11 o’clock in the morning! Denis was a leader, something that you most certainly are not! You are a civil servant, Mr Whatever-they-call-you, nothing more!”

McGahy goes, “I have been an educator for more than 30 years!”

McGahy is one of those people; when you challenge his authority, he storts quoting his LinkedIn profile.

But the old man is having none of it. He’s there, “None of us came here today to hear you speak! We came here because we loved Denis, him and all his wonderful imperfections!”

It’s, like, a genuine mic drop moment? And that ends up getting recognised by the crowd, because they all stort clapping and cheering. But the old man isn’t happy to just leave it there.

He goes back to his cor, storts it up and then – I swear to fock – he reverses it at, like, 70Ks per hour towards the statue. We all end up having to dive for cover as he hits the plinth with his rear bumper.

The statue comes toppling down.

The old man gets out, then two or three randomers help him lift it into the boot of the Merc, which then refuses to close. He goes, “I shall be in touch with the board of management about a replacement. And this time, I will be in chorge of the design.”

Then he gets back in his cor and he drives off, Chorlie Haughey’s head sticking out of the boot as it flaps open and closed.

“What a hero!” Oisinn goes.

And it’s one of those rare occasions when all I can say is, “Yeah, no, you’re right.”

‘It was absolute chaos, but we were able to find a sense of peace’
5