Róisín Meets Podcast: ‘I hoped to become a dad this year, not a widower’ 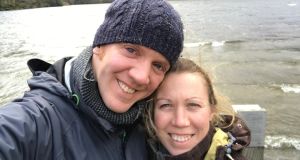 His wife, Liane Deasy, died suddenly in her sleep at their home in Glasthule in Co. Dublin, from nocturnal epilepsy. He was away in Australia at the time.

Soon after Liane’s death, Mark began a blog called There Are Words, which he says is an attempt for him to understand her death, to share his grieving process and to find something positive in such a tragedy.

“There’s been a lot of unexpected positives from it. For one, my friends and family know pretty much exactly where I’m at,” he told Róisín Ingle, on the latest Róisín Meets podcast.

Liane loved sea swimming and Mark has found solace in it since her death.

“Again, like the blog, it started having unexpected benefits. You can’t really concentrate on anything else except the cold. It’s a complete physical reset,” he said.

Also on the podcast, Mark talks about Liane and the kind of person she was, how the loss of her is still very raw and what he does to try and get through it.

Between now and April 20th 2018 Mark will be looking to take part in or organise fundraising events to support the work of Epilepsy Ireland. He has raised more than €16,500 so far this year and you can find out more at therearewords.com.