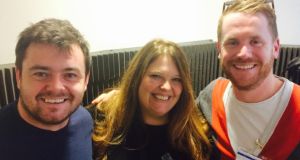 Laurence Kinlan and Ian Lloyd-Anderson, first seen on screen together as Elmo and Deano in Love/Hate, are now reunited on stage with roles in Conor McPherson’s The Night Alive.

This week on Roísín Meets... Laurence explains his belief that the hit drama will not be returning to our screens.

“It’s just my opinion, but I just don’t think it will. People keep asking why and I say, because so many characters have been killed off, we’ve had a year off, it’s only Stuart writing it, it’s a lot of work, he’s doing other stuff now,” he says.

“I’d hate for it to come back and for people to say, ‘ah it wasn’t really as good as the last one’.”

“I think they should do a prequel, because then I’d be still alive,” says Ian, whose character met a grisly end in Season five.

If the show’s fans have not quite moved on, the two actors clearly have. The Night Alive has just opened in The Gaiety and they are excited about the audience reaction and the backstage atmosphere.

“We’ve all had opening nights where you can feel this one is not quite a hit. Last night there was real positivity,” says Ian.

Laurence feels that The Night Alive playwright Conor McPherson is under-appreciated in his home town. “I’m always surprised more of his stuff doesn’t get put on here, because he’s an incredible playwright,” he says.

They also talk about how they were first bitten by the acting bug, Laurence’s tough upbringing (“Love/Hate wasn’t a a big stretch for me”), Ian’s small role in Game of Thrones (he recites his single line), and help Roísín to announce the winner of last week’s Ross O’Carroll-Kelly Heineken competition.

The Night Alive runs from September 22nd – October 4th at The Gaiety Theatre.