Recently I had to help my daughters stand up for themselves. I’ve marvelled at their maturity 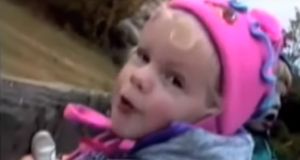 The Best Day: Taylor Swift as a child in the video for her song

Taylor Swift and I go back a while. I remember the first time I heard her name. I was giving prizes to secondary students on stage in a school hall in Dublin. During a break in proceedings, a teenage girl with a guitar in the audience sang a song called The Best Day.

It was a deceptively simple song about childhood written from the perspective of a small girl. It was about a mother having her daughter’s back when she was bullied at school and about the “best days” they spent together.

It was also a classic piece of Swiftean storytelling. I know that now. Back then I only knew the combination of those lyrics and that melody rendered me an emotional wreck. I cried and I didn’t stop crying for the rest of the presentation.

I’m prone to public displays of emotion. I even wrote a book of the same name. But this one was epic. I cried as I gave out the rest of the prizes, I sniffled as I accepted the bunch of flowers I was given, and when I was introduced to the girl with the guitar my bottom lip quivered like an infant with an axe to grind.

Perhaps it was because I had two new twin baby girls myself. I was hoping to create many Best Days for them and with them. Perhaps I recognised my own mother’s fierce love

“Did you write that song?” I asked the girl, thinking if she did then she was a genius and I needed to call Louis Walsh or some of the other star makers who randomly end up in your phone contacts when you are a journalist.

When I went home that night I looked up the song on YouTube. Who was this Taylor Swift person? The video for the song, which was from Swift’s second album, Fearless, is made from home videos of the singer, some from when she was five years old and growing up on a Christmas-tree farm in Pennsylvania. Swift wrote the song when she was a teenager.

Apparently, Taylor Swift’s mum, Andrea, cried and didn’t stop crying when she heard it first. Swift played it for her as a present one Christmas Day. Andrea Swift cried so much that Swift had to stop performing it onstage during her Fearless tour, because her mother would become so overwhelmed with emotion. I still don’t think Taylor’s mom cried as much as I did over that song.

I bawled for about a year. I played the video for everyone who came to the house. Or those who would humour me, anyway.

Perhaps it was because I had two new twin baby girls myself, I was hoping to create many Best Days for them and with them. Perhaps I recognised my own mother’s fierce love. Perhaps. Anyway, the song became a musical touchstone as I navigated the puzzle of parenthood.

If The Best Day brought me to Taylor Swift, the rest of her songs and videos kept me there. My daughters started to like her music. I learned how to play The Best Day on guitar and made them sing it accompanied by my terrible strumming at a school concert. I watched them dance around the kitchen to Shake it Off.

I became protective of Swift when Kanye West interrupted her VMA awards moment to big up Beyoncé, and later found myself defending her at dinner parties to people who were annoyed that she wouldn’t risk alienating fans by speaking up against people like Donald Trump.

We can’t protect the young people in our lives or guarantee any happy endings. But we can support them as they find their voices

I’ve been thinking about Taylor Swift because of Miss Americana, the documentary about her by Lana Wilson. If you want to talk to young people about body image issues, to teach them about sexism and harassment and to help them understand that true happiness is never based on the approval of others, I’d recommend you watch it with them.

The documentary – on Netflix – shows Swift’s journey from professional “nice girl” to unapologetic artist, who despite opposition from some men in her life, including her dad, began using her fame to speak up for herself, for women and for the LGBTQ community.

I’ve also been thinking about Swift because recently I had occasion to support my own daughters in standing up for themselves. The experience took its toll on me more than them. Their resilience has taken my breath away. I’ve marvelled at their maturity.

They are, like a lot of us, sensitive people. They worry about the coronavirus and Caroline Flack and car crashes and climate change. But when it came to standing up for themselves, they taught me so much.

And as I listened and learned, another song came spiralling through my synapses: Pick a Story by Juliet Turner, the Co Tyrone singer whose songs made me cry before I’d ever heard the name Taylor Swift.

“I’ll be there but I can’t protect you,” Turner sings. “I cannot give you all your happy endings.”

And I know. I know we can’t protect the young people in our lives or guarantee any happy endings. But we can support them as they find their voices and cheer loudly as they figure out how to create their own.