Róisín Ingle: The moment I realised the world has changed

In the ‘new abnormal’ we queue for everything: prescriptions, racks of lamb, fish and chips 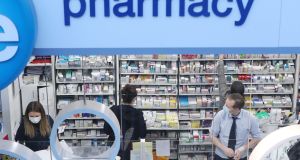 'I was queuing outside the pharmacy last week as I looked across at the daffodils.' Photograph: PA

We’ve all had those moments recently when we’ve realised We’re Not in Kansas Any More. Or, to keep it local, Kimmage. Or Cahirciveen.

Maybe for you it was driving past the massive queue for the fish and chip shop in Howth that appeared to laugh in the face of social distancing guidelines. Or maybe it was when you found yourself saying, “Right. I’ve enough meals in the freezer to keep us going until the 17th of June.”

I personally knew the axis had shifted on the world when I found myself jigging along to a dancercise tutorial in my front room.

We’re in a place now where we’re suddenly so grateful for simple, uncomplicated, beautiful things. Thankful for ABC. Anything but corona

It took a pandemic but there I was, learning to sashay across my sittingroom under the instructions of two preternaturally perky women in Lycra. I was not in Lycra. I was in my pyjamas, which double easily as exercise gear, as I’m sure you’ve discovered.

Some of my friends are gone mad for online yoga. One is knitting a complicated jumper. Every time I turn around my partner has got the sandpaper out prepping another wall for a mammoth paint job he appears to be planning in our house. File it under “keeping busy”. File it under We’re Not in Cabra Any More.

I don’t know if they planted more daffodils in Fairview Park than usual. It could be that as I was looking across the road, the blanket of yellow and green just seemed more dazzling than in previous springtimes. Maybe it’s because we’re in a place now where we’re suddenly so grateful for simple, uncomplicated, beautiful things. Thankful for ABC. Anything But Corona.

I was queuing outside the pharmacy last week as I looked across at the daffodils. This is what one of my brothers calls the New Abnormal. We queue for everything now. People were getting prescriptions filled.

My daughters were also queueing, outside Brady’s butchers. There was a man in there, they told me, saying his wife would kill him if he didn’t get enough racks of lamb. I liked hearing about it.

I wanted to be reminded of the Old Normal. Like when we went for a cycle to Clontarf later that day and decided, as we sometimes used to on sunny evenings, to get fish and chips al fresco. There were four adults queuing outside the chipper, standing well away from each other, and three teenagers with cool haircuts who weren’t.

Only five people were allowed into the shop at any time. A sign at the counter said: “Social distancing is recommended”. Recommended. It suddenly felt like too polite a word.

Next door in the newsagents, two young staff members were discussing a colleague who was being tested and talking about the glass screen that was going to be installed between staff and customers. They looked pale and worried. I wished them good luck.

When the food was ready the four of us went over to the promenade, found a free bench and sat there eating while watching a lavish sunset and gently honking geese flying overhead in a formation Beyoncé would be delighted with. Later, on one of my many new WhatsApp groups, a friend informed me they were Light Bellied Brent Geese. “Right now, in the heightened quiet, the birds are owning the city,” she wrote.

It’s only a great time to batten down the hatches. Make soup. Plant seeds. Paint walls. And, God, though it pains me deeply to admit it, to try a bit of dancercise

No exaggeration, it was the best fish and chips I’ve ever had in my life. It’s like we are on holiday, I found myself thinking. And that’s when I knew it was the last time I’d be going to a fish and chip shop for what might be a long time.

We are not on holiday. We’re potentially contagious, a danger to our fellow humans, especially the most vulnerable ones. We need to stop thinking that this is the perfect time to finally do the cliff path in Ballycotton, or the Bray to Greystones walk.

It’s not a wonderful time for a family forest trek, despite the great tree-hugging adventures I’ve been planning. I loved meeting my neighbours, at a responsible social distance, on the road for a Mother’s Day glass of wine but it feels like the time for that has also passed.

It won’t ever, for the foreseeable future, be a lovely evening for al fresco fish and chips.

It’s only a great time to batten down the hatches. Make soup. Plant seeds. Paint walls. And, God, though it pains me deeply to admit it, to try a bit of dancercise.

We’re Not In Kanturk Any More. Stay home. Save lives.