Róisín Ingle . . . on the wee joys of heading north 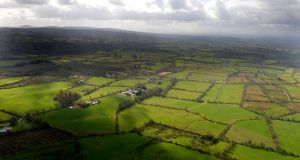 Craving a wee holiday before our actual holiday (six days to go, not that I’m counting) we hightailed it to Portadown for the weekend. This particular holiday location might seem counter-intuitive to some of you, but driving through the lush countryside around Poyntzpass on our way there, one of my daughters looked out the window and said: “I love this part of Ireland. How come it is so beautiful?” And we all silently drank in the view which appears in parts like something computer generated from the Narnia films. I often think of good old Belfast boy CS Lewis when I am “up North”.

When we drove into Portadown, the other daughter said: “Daddy, you’ll know the answer to this question. Why is there so much bunting around here these days?”

Their Daddy, a former Orangeman who has never lost his appreciation for a good pipe band, a well appointed sash and a properly buttered ham sandwich eaten stoically on a bench in a damp field, said “because it was the twelfth of July, a big celebration”. At which point I heroically bit my tongue so hard I nearly passed out.

When we got to Queenie’s, the lady of the house wasn’t there. So we went to Lidl for lunch provisions. We are an Aldi family mostly, so when you go to Lidl after not having been there for ages it’s a bit like a holiday in itself.

I found a brand of pastrami I’d never seen before which gave me a little thrill. At one point I thought about investing in some more tupperware and decided against it. It is exactly this kind of mindless occupation I am craving when I go away, so I intend to spend quite a bit of time on our holiday proper scanning every aisle of the local Supermarché.

As a supermarket related aside, I honestly don’t know what we are going to do when a giant Lidl opens up across the road from our local Aldi. But I do know there are interesting times ahead.

Queenie had been away at a funeral. A neighbour on the road, Philomena McLornan (née Quinn) had died. Anyone who ever had the pleasure of meeting Phil would never forget her. She was the most eccentrically dressed person in Portadown, and possibly Northern Ireland. (She would take that as a compliment, by the way. As somebody who knew her well told me, when it came to other people and what they thought of her: “zero f**ks were given.”)

The vicar was deeply complimentary of Phil’s sartorially expressed individuality, although he put it more politely. Queenie gave us a full report when she came back. She was full of praise for the funeral service and for the “quality spread” laid on in the hall next door.

Apparently, the vicar said that when Phil got into heaven, she wouldn’t be at all impressed by the all-white dress code and that she’d be doing something about that state of affairs pretty sharpish. It was not unusual to see Phil walking down the road in luminous yellow stilettos, an orange dress and a pink felt hat with appliquéd flowers. She was never one for fading into the background, even in Portadown which is not well known for people who stand out from the crowd. “She didn’t care what anybody thought,” said the vicar, full of admiration.

Phil was one of the Portadown followers of this column. I’d like to take this opportunity to thank her and the other people who occasionally stop me in The Yellow Door deli to say they are regular readers.

At the funeral, Queenie basked in the recognition as gradually some of the mourners realised just who was in their midst. “We read all about you,” they said awestruck as a delighted Queenie nearly keeled over under the weight of her minor celebrity.

Later, feet up in front of the television, Queenie once again ruminated on her biggest life goal (second to meeting Daniel O’Donnell), which is appearing as a contestant on Winning Streak. Did I have any “media connections” in that regard, she wanted to know? Could I pull “a few strings”?

A woman from Brittany, on holiday in Ireland, had managed to land a place on the show the day before she was due to head back to France and Marty Whelan kept speaking in dodgy French to the poor (slightly less poor, after her appearance in fairness) madame. As we watched, I told Queenie that my extensive media influence did not stretch to the mysterious, confetti strewn corridors of Winning Streak, but that if I ever met Marty I’d say hello.

And confirming, if such confirmation was ever needed, that the next time I need a wee holiday I should just head North, Queenie replied: “I suppose it might help if I bought a ticket.”