“My princess T-shirt fatwa comes from a place of good intent: I played ordinary, common or garden, Lego when I was a child” 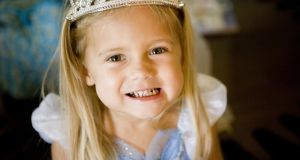 The two T-shirts have been sitting on the edge of the sofa since Christmas. They were part of Queenie’s present for our six-year-old girls. She is always generous and this year there were books and clothes and games and these two T-shirts which I can’t bring myself to put on my offspring.

One features a picture of a blond, blue-eyed (obviously) princess and then the words “IN TRAINING” underneath. The other has the same princess image and then illustrations of the kind of things that every “princess” needs: Nail varnish, lipstick, diamonds and a pink love heart shot through with an arrow (the T-shirts are, you will be astonished to learn, the colour pink).

My daughters are partial to T-shirts in general and I should point out they didn’t have any issues with these ones. But as soon as they came out of the wrapper I took agin them. It’s one thing the girls playing dress up and pretending to be Snow White or Cinderella, characters from storybooks and animated movies; it’s another them going around officially endorsing the generic “princess” message.

I made sure to tell my boyfriend not to tell his mother that I had taken agin the T-shirts. “Don’t tell Queenie. She’ll think I’m being over the top and annoyingly Dublin and it might hurt her feelings,” I told the father of the “princesses in training”.

On St Stephen’s Day, he went up to Portadown as usual to watch a football match. The following day I travelled up on the train with the girls. I was barely in the door before I realised my instructions about keeping my disapproving thoughts to himself had not been followed through.

“So you didn’t like the T-shirts,” she said with a twinkle in her eye. If there is one thing Queenie likes more than shopping for princess T-shirts it is needling me about my antipathy towards princess T-shirts.

“I don’t know what you mean,” I said. I didn’t want to get into it with Queenie for the reasons already stated to the father of the princesses.

But my princess T-shirt fatwa comes from a place of good intent: I played ordinary, common or garden, Lego when I was a child, not the special girl Lego I keep being drawn inexorably to in the toy aisle.

I rode my brother’s old bikes and played marbles and jacks and spent days nearly getting killed up trees and haring through fields of wild brambles where luxury apartments now stand.

While I did notice back then (approximately 100 years ago, history fans) that making my Holy Communion meant wearing a miniature wedding dress while the boys got to wear their usual clothes, except a bit smarter, I wasn’t aware as a child that there were girls things and boys’ things. But it seems like every day I’m having to tell my daughters that “no, Star Wars is not just for boys” and that “yes, girls can like soccer” and “of course girls can be chefs when they grow up”.

I heard a while back about a woman who gave a small boy, her nephew, a toy kitchen set for Christmas. It caused consternation in the family, with the father disapproving of his boy being given a “girly” toy.

You can have all the Jamies, Hestons, Dylans and Kevins you like in the world and some people will still worry that a toy spatula will irreparably feminise a small boy beyond recognition. The set was taken back to the shop. The boy continued to play with utensils and join in enthusiastically when his Mammy baked cake. (I think only Mammy bakes cakes in that house.)

Let Clothes Be Clothes and Let Toys Be Toys are two organisations that keep a vigilant eye on all of this sort of thing.

On their websites they highlight an advert for something called a Bell Amigo Pink Hearts Bike Helmet, which made the promise that it is for “lovely little girls who really enjoy playing on their bikes and looking really pretty when they do it”. The boys version was “sporty and cool, designed with safety at the top of the list”.

As the website put it: “Helmets for girls and boys that aim to protect outdated stereotypes as much as your skull. Phew.” The company in question has since revised the ads, but the toy and children’s clothes aisles continue to be a minefield if you are a parent who wants your child to have a richer, more adventurous life experience and not one that’s unnecessarily limited by their gender.

I walk these aisles ever watchful and hypersensitive (oversensitive Queenie might suggest) to all of these messages.

I suppose what I am saying is Let Children be Children. I think I’ll get it on a T-shirt.