Róisín Ingle: I’ve become looks blind. My friends’ ‘hotness’ means nothing to me any more 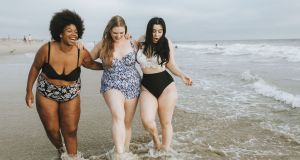 One of the biggest lies perpetuated across popular culture is the one that suggests only conventionally good-looking people are attractive to other people. The truth is we’re all fancied by somebody in our lives. All of us: Cross-eyed people. Large-eared people. Bald people. People with untamed eyebrows and interesting facial moles. Donald Trump.

Take me for instance. I’m fat and attractive. (Maybe not to you but I know at least one person who thinks I’m fanciable, and one is enough at this time of my life, thanks very much). There are a lot more of us fat, attractive people in the world than many like to admit. The singer Adele was a ride before she lost weight. She’s still a stunner, just in a smaller tracksuit size.

I’ve always had a sprinkling of conventionally good-looking female friends. We all do, don’t we? When I say “we”, I am talking about those of us who are attractive but would never get to appear on, say, Love Island or Love is Blind.

Speaking of which, the big lesson from the Netflix show Love Is Blind is that love is not blind. At least not according to the people who made the show and who wanted only conventionally good-looking people in it. They should have called it Love Is Bland.

I spent much of that time acting like my friend’s bodyguard, fending off unwanted advances from men of all ages in clubs and pubs

What I notice about hanging around with good-looking women is how other people behave around them. Hetrosexual men seem to feel it’s perfectly fine to stare at them slack-jawed, or to attempt to get physically closer to them.

It’s not as bad as it used to be. When I was a teenager in the 1980s I was best friends with a very “good-looking” woman. I spent much of that time acting like her bodyguard, fending off unwanted advances from men of all ages in clubs and pubs. My tactics ranged from polite – “could you please leave her alone, she doesn’t fancy you” – to violent: I once had to resort to punching a man in the head to escape a more extreme situation.

I’m not sure why I appointed myself Chief Fender-Offer, but I think it was because the breathtaking entitlement displayed by this steady stream of men left me in a permanent rage. At the time, calling men out for this behaviour was not the done thing. I was either stupid or ahead of my time. Possibly both.

“F**k off, you f***ing lesbian,” was the spectacularly unoriginal response I got most often for my trouble.

Another thing I notice is that a lot of people, including women, talk about “good-looking” people as though their looks were an actual achievements, successes as hard won as their stigma-busting activism, their doctorates in philosophy or their master’s degrees.

“She’s amazing, isn’t she?” they say admiringly. “So tall! So skinny! So gorgeous!”

“Is it not annoying hanging around with them?” one friend said of my conventionally good-looking friends the other week. I thought about it and realised I’ve become looks blind. I barely notice their outer beauty any more. Their “hotness” means nothing to me.

I care much more for their attractive personalities than for their symmetrical features or ability to reach things on a high shelf.

If I compliment them it’s for their kindness, not their talent at looking great in a backless dress. I admire their empathy. Their razor-sharp feminist analysis. Their ability to quote lengthy passages from podcasts by Esther Perel. Their witty banter in WhatsApp groups. Their skill at talking me down from a ledge.

I don’t feel I need to keep banging on about how “good-looking” they are. That would be like them praising me for my excellent ears. They are a very nice shape. But it’s genetic. I can take no credit.

When I was younger I did experience jealousy of my “hot” friends but these days it’s less of an issue. It’s one of the great things about getting older, this caring less (and less) about all sorts of things.

For example at the moment my work uniform mostly consists of a roomy, ankle-length, polo-necked woollen dress I purchased from Cos in two colours: black/greeny black. It’s basically a blanket in dress form.

I met a fellow blanket dress wearer recently on one of those days when a cruel wind whipped around St Stephen’s Green. We nodded at each other like co-conspirators. I team my blanket dress with leopard-print runners. The runners remind me I’ve still got it. I don’t know exactly what “it” is. I think “it” just means I’m not yet dead.

Spare a thought for the conventionally good-looking brigade. In a society that places their looks above a lot else, it can be challenging and even traumatic when those looks begin to fade, as one such friend feeling the strains of middle age admitted to me recently.

Good-looking people are people too. Just “better” looking people. And when I say “better” you know what I mean. “Better” according to a certain narrow beauty standard that most people in the real world do not live up to.

Most of us? We are a load of big, fat rides.

One-pot chicken stew with a sweet and spicy twist