I told him I sometimes run away from my family. For health reasons. We laughed 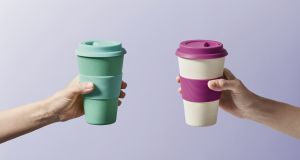 In one of the three fancy supermarkets where I do most of my socialising now, they seem to be getting away with selling items other than posh ready meals and exotic fruits. Long may this continue. Essential items, is what I’d definitely call them. Small children’s clothes. Underwear. Leggings. Slippers. It was the slippers that caught my eye.

It’s a couple of decades since I’ve owned a pair. I think I got some as a Christmas present once and promptly lost them. I never took up slipper-wearing as an adult because indoor shoes were not part of my life growing up. Back then you wandered around the house bare of foot, skipping across freezing kitchen lino – ah, lino – stubbing your toes on hard edges and corners. But when I saw the slippers I immediately realised I was missing out on an essential part of my pandemic uniform.

I had just got paid so I bought the slippers. They are round of toe and the softest grey and fully lined with some kind of furry material. To increase the middle-aged vibes they have a “secret support” built in to the base.

I pad now. I pad around the house in them from morning to evening luxuriating in every one of my 49 years. I hear myself calling to my daughters: “Fetch me my slippers, they are in the hall, there beside my reading glasses.” I feel no shame. I’m embracing my inner-ancient and my feet are grateful.

The pandemic is accelerating the ageing process, my mother says. She lost it with a young woman while on the phone to the bank the other day. “Do you know what age I am? I am 81. How old are you”? she told the woman (33)in the bank using a high-pitched narky voice she hardly recognised as her own. I felt her pain. I sometimes feel old these days. Not with a capital O. But old enough.

In the second of the three fancy supermarkets where I socialise and entertain myself now, I bought a spatchcock chicken for a fiver and a packet of frozen gyozas. You’d think frozen dumplings would not work but they do, beautifully, either in the steamer or shallow fried.

My friend told me frozen gyozas are much cheaper in the Asia Market where the queues are long with people lining up to buy lemongrass and sushi rice. In some ways the Asia Market is the fanciest of all the supermarkets and the one where you are least likely to feel like you’ve been robbed in broad daylight after buying only six things.

In the third of the three fancy supermarkets where I get my kicks these days I bought an acidic-tasting coffee and sat outside on a bench drinking it. I sometimes have random conversations with strangers there which is one of the things I miss most about the olden days.

The other day, I sat there sipping coffee in the rain an appropriate distance away from a handsome young Brazilian man. We fell into easy conversation.

We talked about working remotely, the trouble with Zoom and mental health. We talked about his dating life. Chance would be a fine thing was the gist of it. But flirting still happens, and these days Tinder, he laughed, saves lives.

I told him this was my escape time. He said it was his escape time too. He lives alone but sometimes needs to run away from his four walls and his computer screen. I told him I sometimes run away from my family. For health reasons. We laughed even though we both knew it wasn’t a joke.

While we spoke he got two calls from his neighbours, a couple aged 84 and 85. They knew he was out so they wondered would he get them some milk. They have been cocooning for a year with no family living nearby. He used to play cards with them before but for the past year he just leaves their shopping at the door and runs errands for them. Before we left, we followed each other on Instagram. We said we’d keep in touch.

When I got home, I told my children about my new handsome friend and showed them his Instagram profile and they accused me of cheating. Chance would be fine thing, I thought as I put on my slippers.

There were no fancy supermarkets back in my barefoot lino days. Or at least none I knew about anyway. There was just H Williams, which is now Tesco and a shop in town that sold salami and cheese. I remember the whiff when you’d walk past. It smelled the way I imagined Paris might smell. When this is all over I will finally smell it for real, I’ve promised myself.

Anyway, some important news: On Sundays, one of the fancy supermarkets, the British one, sells everything nearly out of date off cheaply, the little yellow stickers wink at me as I go for my weekly visit.

You can get a honey roasted ham and mustard sandwich for 30 cent, for example. I bought one the other day and sat outside sharing it with the giant seagulls that roam the streets now like they own them.

It was fun. Not with a capital F. But fun enough.