Róisín Ingle: How deep are our reserves of patience? We are about to find out

We’ve all got a desperate dose of lockdown lethargy 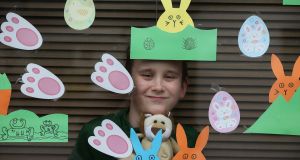 The so-called Easter Holidays arrived and the home schooling or distance learning or whatever you want to call it went out the window. Good riddance. I mean it was fun for about five seconds before it became too much like hard work on top of Actual Work.

“We are living through literal history, it’s bigger than school,” my two nearly 11-year-olds keep reminding me as they create corona cover songs, fail to teach me the Renegade Tik Tok dance and make daily batches of pecan cookies.

Education takes many forms. I’ll tell that to the judge.

Another thing that disappeared when “Easter” came was the concept of bedtime, which is now a distant memory, a relic from olden days before the virus. I heard the girls rattling around at midnight the other night. I didn’t even have the energy to roar at them demonically from my bed.

What I did instead was put my earphones on and attempt to drift off to a BBC World Service panel discussion about the various ways people are parenting their way through this crisis in India.

They seemed to be mostly getting on grand so I turned it off in disgust.

My children are not yet familiar with the term “binge watching”, which is strange because they appear to be training for it as though it is a new Olympic sport. Observe the athletes as they adopt the lying-down position on the sofa – sitting is so pre-pandemic – to inhale endless episodes of Glee on Netflix.

There are six seasons of the thing, around 20 episodes per season. How can they be nearly finished it already? I check the wine supplies (adequate but rapidly depleting) and decide that, with all the slickly choreographed dance moves, power ballads and life lessons about teen relationships and unplanned pregnancies, Glee counts as educational.

It’s been 35 days since that terrible Thursday when Leo Varadkar stood in Washington, looking stern but shook, and gave that first address to a frightened nation.

We’re still not the better for it.

Let’s be honest. Pandemic fatigue is setting in. We’ve all got a desperate dose of lockdown lethargy. Some people with huge back gardens in Dublin and holiday homes in west Cork are breaking the rules while some are having niggling, recurring if – as yet – unrealised fantasies about breaking them.

It’s a privileged kind of weariness. It is in no way comparable to the fatigue of front-line health workers, or the fatigue of grieving families or the fatigue of the older, white-haired Dublin woman I saw in a video on Twitter. She was being loudly applauded by her neighbours as she was helped gently out of the ambulance and led slowly back into her home having recovered from the virus. A positive news story. We hold them close, like good luck charms.

Fatigue sets in so you try to find new ways to fight it. We’ve used an empty gherkin jar as a repository for all the things we are longing to do when this is over. The pieces of paper are like arc lamps, guiding us to better times: Swim in Lahinch. Hug Nanny. Go for a hike with Maisy and Georgia. Visit Patsey in Howth. Go up north to see the new baby cousin Tommy and all the other cousins. Have one of Queenie’s legendary roast dinners.

The jar was full after a few minutes of frantic scribbling. We’ll start another one. And another one after that.

The fatigue takes on different colours and shapes for people depending on their circumstances: for those still studying for a postponed Leaving Cert. Or for those stuck in homes with their abusers. For the people who are full-time carers with no promise of respite. For the children with intellectual or physical disabilities. For the scared communities in the direct-provision system. For the stoic older man living alone. For the nurse who has developed a cough. For the intensive-care doctor who is burned out but does not want to give in to this fact.

Fatigue is setting in. And Leo Varadkar’s stirring speeches are becoming too normalised, too familiar. Quotes from Seamus Heaney’s poetry come at us at a such a pace that they don’t do the job they are supposed to do.

If we winter this one out, we can summer anywhere, apparently. But for how long?

I go searching for the poem this ubiquitous line came from and discover it wasn’t from a poem at all but an interview Heaney gave about a collection of his called Wintering Out. The title, he said, came “from memories of cattle in winter fields. Beasts standing under a hedge, plastered in wet, looking at you with big patient eyes, just taking what came until something else came along. Times were bleak, the political climate was deteriorating.”

He was talking about the worst times in the North, but he could have been talking about now. Times are bleak. Our resolve is deteriorating. We are damp beasts under the hedge, with big patient eyes.

How deep are our reserves of patience? We are about to find out.