Róisín Ingle: Fintan O’Toole on TikTok? It’s only a matter of time

You could get lost in TikTok. Many have. It’s the only app worth knowing about 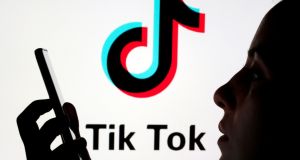 “Quiet on set!” Now that the pretence of distance learning has dissolved and giddy anarchy reigns in our house, this is the phrase I hear most often from the time my daughters emerge from their scratchers at whatever o’clock until they retire again at bedtime-is-such-a-pre-pandemic-social-construct o’clock.

I blame the parents.

Well, I blame one of them anyway. You see, I let them sign up for TikTok, which the pedant in me really wishes was called TickTock. If I write about it here, maybe TickTock will start to catch on. Come on, kids, TickTock is much more happening than TikTok. TickTock, like the clock. A clock, you know with the minute hand and one for seconds? No? Oh Tok off, then, see if I care.

Anyway, it’s the only app worth knowing about in these pandemic times. My daughters and many millions of people around the world appear to be having the TikTok/TickTock time of their lives.

What is TikTok? That is a fair query. I spent about two years asking the same question, because no matter how many times my children explained it to me, while making an impassioned and ultimately successful case to be allowed to sign up, I found it impossible to grasp.

I wonder are there certain things you are just not able to understand past a certain age? Snapchat is another one. And The Floss. Remember The Floss? And the way things are sick now, when they are really, really cool. I will never get it. I am not supposed to. Nor are you, almost certainly.

But some things, for reasons of cyber safety, we have to get our heads around, and so I am trying hard with TikTok. What is it? It’s an app adored by children and teenagers and the sicker adults among you, where people post short, snappy, 60-second videos about anything from tadpoles to tractors, but mostly it’s full of people doing dance routines and lip-synch performances that are impossible to follow. Impossible for me to follow, I should clarify.

One of my least cherished lockdown memories will be the hours I spent trying to do a TikTok dance called Renegade. I really tried: “Renegade, renegade, something, something, flick, do a move like an octopus, then put your hand around your head, no, not like that, like this, oh God mum you are so embarrassing, it’s a simple, basic dance and you look like a demented kangaroo.”

It was like a Kafkaesque nightmare that never ended, until I cracked one day and cried actual tears of frustration. They haven’t asked me to try to do Renegade for weeks, thank Tok. Even writing about it here is retraumatising.

Apparently TikTok has become even more popular as an isolation distraction, more than two billion downloads now and counting. During the grimmest of weeks, when the news was always bad, it offered an escape and a comic take on lockdown life.

I knew TikTok had taken over when I heard the World Health Organisation was telling people to wash their hands on it. I see the New York Times is on there with very clever and compelling Covid-19 and Black Lives Matter content. The Washington Post has somebody on it wearing a Washington Post T-shirt and urging people to buy the paper.

As yet The Irish Times has not joined, but you know it’s only a matter of time before Fintan O’Toole is on there, dropping his sunglasses from his head to his nose on exactly the right beat and doing a dance about government formation.

Even after signing up myself – don’t bother searching for me, private account, and I haven’t posted so much as a sunglasses drop – I don’t fully understand the phenomenon but I can see the joy it is spreading at a time when joy has been in such short supply.

Here are some of the other things on TikTok: there is a woman dyeing her hair pink. There’s a man dyeing his hair blue. There’s a dude who looks like Roddy Doyle dancing very badly. (I don’t think it’s actually Roddy Doyle, but the world is upside down at the moment so anything is possible.)

There is a girl playing cricket in her bedroom. There’s a teenager doing keepie-uppies in his garden. There’s an artist pouring paint – these videos are mesmerising actually, the rainbow colours swirling together. You could get lost in TikTok and many, many people have, including my daughters.

“Quiet on set!” This is the sign that we have to stay silent for the next 60 seconds while the girls create their latest videos and post them to their private accounts. They have three followers each, including me.

For context, the wonderful teenager Hannah McSorley in Co Tyronehas more than half a million followers for her account @.baby.frogs, where she posts about the tadpoles in her garden.

My children do dances but they also do magic tricks. And cookery videos. They made Jamie Oliver’s hamburgers the other day and posted the whole thing on TikTok. This morning I caught one of them making her bed, an event so rare I asked whether I should take her temperature.

House devil, TikTok angel. Maybe that’s a phrase that will catch on with the kids. Yeah? Sick.