Róisín Ingle: All I want for Christmas is a weighted blanket

Admittedly, 48 hours before Christmas is a bit late to drop hints about what I want 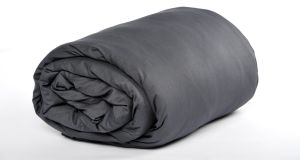 All I want for Christmas is . . . a weighted blanket. These items are all the rage at the moment. A good way to explain them is to say weighted blankets are to sleep and calmness what Dryrobes are to performative sea-swimming and boasting.

Happily, weighted blankets, while they might be as expensive, are not any way near as controversial as Dryrobes. This is because people who own weighted blankets aren’t, as far as I know, doing a Dryrobe on it: popping down the shops (or for take-away pints, you know who you are) wearing them like a status symbol, causing casual onlookers, those who favour normal towels for changing out of their togs, and coats for going to the shops, to explode with rage.

It’s kind of like a large hot whiskey for your bed and, easily suggestible as ever, I’m dreaming of one this pandemic Christmas

Weighted blankets, if you aren’t hip enough to know about them, are heavier than usual blankets in that they weigh roughly 10 per cent of your body weight. You drape them across your bed like a luxurious albatross, a weight you want on you as opposed to one you want to shed.

Apparently, and I’m reading this off a brochure, they “mimic the feeling of a warm hug and help create a deep sense of relaxation”.

So it’s kind of like a large hot whiskey for your bed and, easily suggestible as ever, I’m dreaming of one this pandemic Christmas.

It makes perfect sense that 2020 was the year nerve-soothing weighted blankets, which have been with us for a few years now, came into their own. On social media, where rhapsodising about how much more sleep you are getting in the pandemic is rampant at the moment, a lot of people are singing their praises.

John Lewis in England sold out of its best-selling version but it’s back in stock and the department store is marketing it by pointing to research from scientists at the University of Massachusetts which found that weighted blankets could result in lowering anxiety and have a therapeutic influence on mental health.

Like a cute puppy, a weighted blanket is not just for Christmas. However optimistic you are, however quickly the vaccine comes, the smart money says we have the guts of another difficult year to get through before things return to “normal”, so we’ll need them to ward off pandemic-induced anxiety all year long, even in summer when a lighter weighted blanket, that still has all the benefits, is an option.

Admittedly, 48 hours before the big day is a bit late to be dropping hints about what I want for Christmas. Fortunately, the man I live with is a last-minute merchant, so you never know: this last-minute hinting might pay off.

Unfortunately, he doesn’t generally read my column unless someone emails it to him to alert him to the fact that I’ve embarrassed him by mentioning something like, say, the year he bought me a set of coat-hooks and an ironing board for Christmas which, as my friend noted, helpfully “lowered the bar for all of mankind” at this time of year.

Apart from blanket-envy, I’m not really craving presents this Christmas. I am craving the distracting, warming, weighted-blanket-inducing experience of Christmas. The smell of cloves (which I won’t have near me any other time of the year) in ham. The taste of too many chocolate oranges. The rows over board games. The Lockdown One-style stillness across the city on Christmas morning.

For us Christmas fans, keeping Christmas seems to have taken on a new significance this year

I felt desperate this year, of all years, to manifest whatever I could of the Christmas spirit as soon as possible so the tree went up early, inspired by novelist Nora Roberts who said “nothing ever seems too bad, too hard, or too sad when you’ve got a Christmas tree in the living room”.

Our lights from Christmasses past were all banjaxed so we went to Aldi, accidentally arriving at the crucial moment when the special deals had just returned to the middle aisle. We grabbed those highly-coveted multicoloured candy canes to illuminate the front window and strings of coloured lights for the tree.

That night – it was only late November – we lit the fire and sat in the glow. We’ve been sitting in the glow ever since. We’ll probably be here until the end of January, all being unwell.

My Dubliner friend left Ireland a couple of weeks ago, on an almost empty plane bound for his adopted home of New York. Someone said to him “really, you’re leaving before Christmas?” and he replied “why, what’s happening at Christmas?”

What he meant was, what difference does it make? To be in Ireland at Christmas or in New York at Christmas? And I understood his point.

It’s important to acknowledge those people who are no fans of Christmas, pandemic or no pandemic, the ones who can’t wait until it’s all over.

But for us Christmas fans, yulophiles who long for what my friend Jeanne calls this “natural and ancient break in the year, whatever your beliefs”, keeping Christmas seems to have taken on a new significance this year.

Like Dickens said of Scrooge, “and it was always said of him, that he knew how to keep Christmas well, if any man alive possessed the knowledge”. This year, I want to keep Christmas with the warm hug of a weighted blanket on top of me at all times. Surely, Santa, with the year that’s been in it, this is not too much to ask?