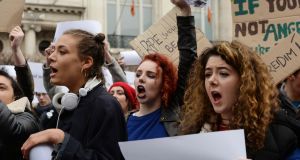 A large group gathered in the centre of Dublin’s O’Connell Street to protest about the result of the Belfast rape trial. Photograph: Alan Betson

The Belfast rape trial, which captivated the public imagination and dominated media coverage, has left many people feeling saddened, enraged and deeply uncomfortable.

As a society, we are not good with discomfort. We’re good with shock.

We were shocked at the text messages sent by the defendants, which referred to women as “sluts”.

We were shocked at the casual and aggressive way the men spoke of pornographic sexual activities such as “spit-roasting”.

Shock is a reaction to the unexpected. Shock is a shift in our world view as something we did not think could happen, happens. And at a certain point, shock becomes a choice.

We should not have been shocked by this trial’s revelations that men can still be misogynistic, that we as a society are still not clear on what consent looks like, that pornography can have an impact on young people’s perception of sex. Our world view should not still be rocked by these ideas – because this is not new information. Conversations about pornography, misogyny and consent have been happening for a very long time. What our shock indicates is that we are repeatedly refusing to engage with these issues; we are refusing to learn; we are refusing to acknowledge truths that make us uncomfortable.

We need to accept that we live in a society where pornography is not just prevalent, it’s practically inescapable – and the truth is, we’re not showing much signs of wanting to escape it.

But we’re not having those conversations. And this is dangerous.

Multiple studies and even a casual foray into heterosexual pornography reveals that an unnerving proportion of pornography portrays sex where no consent is established, and where men are aggressive, degrading and even violent towards women, portraying sex not as something men enjoy with women, but something men do to women.

And without guidance on how to dissect the misogyny and lack of equality this kind of pornography perpetuates, young men can risk internalising the idea that this is what sex is. Not just young men – boys too. Evidence shows that boys, on average, see their first pornographic image at age 11, and begin actively watching pornography from age 14.

Parents, educators and society at large is aware of this – we engage in shocked handwringing about it all time. However, ask us to sit down with young people, acknowledge they have sexual desires, and talk to them about the difference in pornography and real sex? We won’t do it. Because that’s uncomfortable.

And then we act shocked when some men have sex with women, but speak hatefully about women who have sex.

The men at the centre of the Belfast trial were adults, who engaged in whatever activity occurred that night by choice. They, and they alone, are responsible for their behaviour. But the rhetoric they used in their text messages – the language of dominance, of aggression, of degradation – encapsulates the type of dangerous and misogynistic attitudes towards women, sex and consent that could easily be identified, dismantled and prevented, if we openly discussed pornography.

These conversations will be uncomfortable. But we cannot let protecting our comfort take priority over protecting women’s safety. And that it what is at stake.

We need to dwell in our discomfort, and embrace this opportunity to acknowledge difficult truths, and ask challenging questions.

Roe McDermott has a weekly column about sex and relationships in The Irish Times Magazine and is a Fulbright Scholar with an MA in sexuality studies from San Francisco State University. She’s currently undertaking a PhD in gendered and sexual citizenship at the Open University and Oxford.

Irishwoman in Madrid: I just hope my loved ones remain safe and I get to see them
9